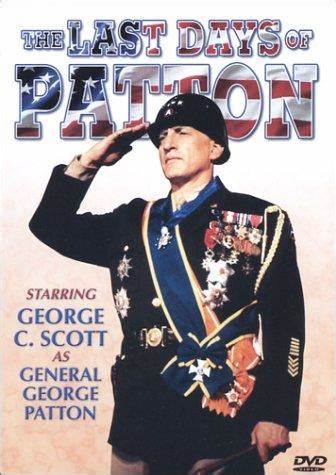 THE LAST DAYS OF PATTON (1986) – George C Scott SINGS! Yes, an ENTIRE SONG while camping it up like he’s in a vaudeville revue! Song and dance man George S Patton belts out Lilly From Picadilly in a WTF moment from this otherwise reasonable made-for-tv movie which SHOULD have been titled AfterP*A*T*T*O*N.

Nearly two decades after George C Scott played Patton on the big screen he returned to the role to depict the final days of the controversial military icon. The above-referenced strange interlude in which the General sang on-stage was a mere aberration but you just knew that as weird as I am I would start out my review with it.

The Scottsploitation angle is the best thing The Last Days of Patton has going for it, because without the novelty appeal of the charismatic actor in the lead role this telefilm would be hopelessly soap-operatic. We’re told the General had an affair with a younger woman but his stoic wife (Eva Marie Saint) tolerated it even though she did not approve. We also get lots of medical drama after Patton is paralyzed following a car accident in Germany the day before he was to leave for America. 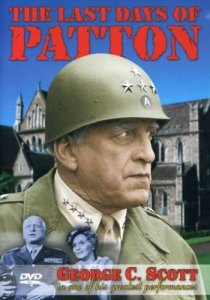 Roughly half of the movie is spent with the great George C Scott in a hospital bed, like we’re watching Whose Life Is It Anyway, Ya Pusillanimous Sons of Bitches? Scott is always watchable, and really shines here, but the other actors have no room. With such a gigantic figure – real-life Elmer Fudd voice aside – it may have been like that in reality, too. Sharing any stage with the likes of George S Patton must have been suffocating for one’s own ego.

The telefilm does flashbacks to Patton’s childhood, time at West Point, wedding day and early military career the right way. They’re kept very short. Before you have time to grow bored or to ask “Where’s George C Scott” the flashbacks end.

The best parts of the movie come early on when we’re shown Patton clashing with Eisenhower and soon-to-be-CIA scumbag Walter Bedell-Smith over Occupation policy in Germany. This drama is handled excellently, with the pros and cons of the issues given full presentation.

The arguments between Patton and Eisenhower made me appreciate once again what is wrong with so many similar exchanges in dramas made now. Recent dramas can’t resist the sophomoric tendency to depict one figure as Being In The Right and the other figure Being In The Wrong.

The Last Days of Patton makes the dramatic exchanges riveting because both men make valid points yet both men are also bested at times in the verbal fencing. It’s so refreshing compared to today’s tiresome “Watch the Figure In The Right Lecture And Harangue The Cardboard Villain” approach.

If the entire film was devoted to this clash and ended with Patton’s inevitable dismissal The Last Days of Patton would be a genuine classic. And by the way I’m overwhelmingly opposed to General Patton’s stand yet the dialogue makes his point of view understandable no matter how much you disagree with it.

(And I think Patton wasn’t just wrong but was insanely wrong. There’s no way there would be long-lasting public support for a fresh war with the Soviets after the world had just endured six years of martial hell.)

Unfortunately, after Patton gets transferred by Ike to a paper army tasked with recording historical documents for use by future scholars of World War Two we get dunked into the Soap Opera bath. We also get so much unnecessary backstory on Patton’s real-life driver Woody that I half-expected to find out he had gotten his own spin-off movie. (The Patton cinematic universe!)

I was ready for this film to be over at least a half an hour before it finally limped to a halt. If you aren’t a fan of the original Patton movie there’s probably nothing here for you. If you liked the Patton of that 1970 flick there’s probably nothing here to change your mind. George S Patton: the man, the legend, is neither one-sidedly canonized nor one-sidedly demonized, which is how it should be in any fair cinematic treatment.

Viewers get General George Patton, warts and all, so hypersensitive emotional cripples should avoid this flick. It’s for adults only. (If you’ve ever referred to something as “problematic” – unironically, that is – you won’t be able to handle this film.)

NOTE: The Last Days of Patton is NOT to be confused with those Patton Conspiracy Movies which look at theories that George Patton was actually assassinated to silence him during those early Post-War years.