NANG-GAI: A GOD OF FIJI 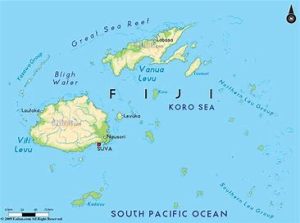 NANG-GAI – Yet another son of Ndengei. Nang-Gai served as the supreme deity’s messenger or emissary. When the sound of the waves crashing on the Rakiraki reefs made so much noise that it was preventing Ndengei from sleeping he sent Nang-Gai to silence it. To this day the surf off Rakiraki is notoriously quiet.

The bats near Rakiraki were also too loud for Nedengei’s liking and the messenger god was sent to coerce them into silence as well. When the birds at Nathilau started making too much noise Nang-Gai was sent to order them to leave the area at night and only visit it during the day.

Once while chasing away yet another hindrance to his father’s comfortable sleep, the god accidentally lost his war-club in the waters off the Fijian island of Naithombothombo.

The inhabitants of the island made Nang-Gai so pleased with their offerings to the deity’s ravenous appetite that he rewarded them by pulling from his arm-band a hundred pigs – the first pigs ever to exist.

He also pulled miles of Masi Cloth from behind his ear as a gift for them before departing. The next morning their chief, who had contemplated trying to destroy Nang-Gai when he was eating so much of the tribe’s food, was found dead for that transgression.

FOR SIMILAR ARTICLES AND MORE OF THE TOP LISTS FROM BALLADEER’S BLOG CLICK HERE:   https://glitternight.com/top-lists/