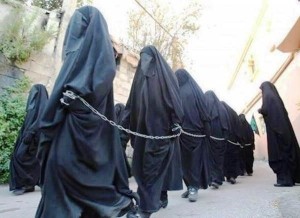 Every so often the world gets subjected to virtue-signaling, privileged white Western women who think they’re accomplishing something by dressing in the degrading body-bags that the patriarchal Muslim World imposes on women. Every time that happens I run this reminder:

UNTIL SUCH TIME AS ALL MUSLIM WOMEN ARE FREE TO MAKE THEIR OWN CHOICE ON THE MATTER, IT IS IRRELEVANT HOW MANY MUSLIM “STEPFORD WIVES” COME FORWARD TO PRETEND MUSLIM WOMEN ALL WEAR THOSE OUTFITS WILLINGLY.

I’m not just pro-choice on abortion – I’m pro-choice on the clothing issue, too. Privileged white leftists are too hypocritical for that. Especially given how they like to indulge in Handmaid’s Tale cosplay. Yeah, as if they would EVER have the courage to stand up to genuinely dangerous theocrats.

WANT TO HEAR FROM BRAVE MUSLIM WOMEN WHO POINT OUT THE DAMAGE POMPOUS WHITE WOMEN DO BY DONNING HIJABS? READ IT HERE  AND HERE