FIRST SEMIFINAL – The OREGON TECH HUSTLIN’ OWLS played the COLLEGE OF IDAHO COYOTES in Final Four action. The Hustlin’ Owls had the Coyotes on the ropes by Halftime with a massive 52-29 lead. After the break Oregon Tech weathered a minor College of Idaho rally to defeat them 93-81. Seth Erickson put up 27 points to lead the Hustlin’ Owls.

SECOND SEMIFINAL – The Upset-minded SPRING ARBOR UNIVERSITY COUGARS clashed with the MARIAN UNIVERSITY KNIGHTS. A defense-heavy opening Half ended with the Cougars on top 25-22. From there Spring Arbor University left the Knights further and further behind on their way to a 66-50 triumph. Seventeen points from Brandon Durnell led the Cougars.

DISTRICT TWO CHAMPIONSHIP – The NORTHEASTERN OKLAHOMA A&M GOLDEN NORSEMEN fought the CONNORS STATE COWBOYS. The Golden Norsemen held a 38-29 advantage at the break but the Cowboys wouldn’t go away and even held a few late leads before Northeastern Oklahoma A&M won the game 67-65 off a Rudi Williams jumper with 1.6 seconds to play. Kyle Lukasiewicz and Samkelo Cole led the way with 16 points each. * THE GOLDEN NORSEMEN ADVANCE TO THE NJCAA NATIONAL TOURNAMENT * 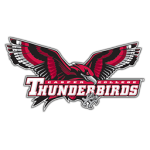 DISTRICT NINE CHAMPIONSHIP – The CASPER COLLEGE THUNDERBIRDS faced the SHERIDAN COLLEGE GENERALS. The Thunderbirds put the Generals on Upset Alert by the Half with a 41-35 lead. From there Casper College pulled away even more for a more comfortable 87-74 triumph. Isaac Bonton’s THIRTY-TWO points led the Thunderbirds. * THE THUNDERBIRDS ADVANCE TO THE NJCAA NATIONAL TOURNAMENT *

DISTRICT TEN CHAMPIONSHIP – This District title tilt pitted the CAPE FEAR COLLEGE SEA DEVILS against the UNIVERSITY OF SOUTH CAROLINA AT SALKEHATCHIE INDIANS. The Sea Devils led the Indians 37-36 come Halftime and then after the break proceeded to squeeze out a little more room. The final score was Cape Fear College 79  USC-Salkehatchie 73. JJ Miles tossed in 27 points to lead the victors. * THE SEA DEVILS ADVANCE TO THE NJCAA NATIONAL TOURNAMENT *

DISTRICT ELEVEN CHAMPIONSHIP – The WILLISTON STATE TETONS took on the SOUTHEASTERN (IA) COLLEGE BLACK HAWKS in this game. A tight 38-36 Halftime edge for the Tetons over the Black Hawks eventually widened into a 91-78 triumph for Williston State. Amar Miller of the Tetons led his team with 29 points. * THE TETONS ADVANCE TO THE NJCAA NATIONAL TOURNAMENT *