JUSTICE SOCIETY 20: A CURE FOR THE WORLD 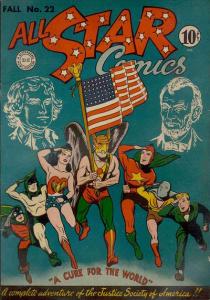 Title: A CURE FOR THE WORLD

Synopsis: A mystical female figure who embodies “The Conscience of Man” summons the Justice Society of America.

She sends them forth to battle the forces of intolerance no matter what form those forces take.

She sends the JSA members back to different time periods where they fight proto-censorship in the stone age, class snobbery in ancient Greece, oppression by the Nobility in Medieval England, witch-hunters in 1690s Salem, MA, Luddites in 19th Century America and the Reign of Terror during the French Revolution.

The heroes overcome individual instances of intolerance in those eras then resolve to fight intolerance in the present day as this non-adventurous tale aimed at educating children comes to a close.

A. For my revised lineup of heroes this time I would rotate the original Superman back in as this issue’s replacement for the unbearable Johnny “Jar Jar Binks” Thunder. And I would always use Hawkgirl instead of Hawkman.

B. As usual I would also have Wonder Woman actively taking part in the adventure instead of the absurd way they had her serving as the JSA’s secretary.

C. Targeted at children, this was one of the most simple-mindedly didactic superhero stories until the overrated Alan Moore came along. Even very young readers of today could handle a slightly more sophisticated story so I would alter the peepee-caca level plot.

D. Rather than pointless time-travel I would incorporate the fact that – HELLO – World War Two is still raging, and would have the Justice Society battle the forces of intolerance in small (but strategically vital) fictional countries occupied by the Axis Powers.

E. PART ONE – At the behest of a Queen dethroned by the Axis Powers Wonder Woman, the Spectre, Hawkgirl, Starman, the Atom, Doctor Midnite and Superman travel to a small European country which still practices slavery and very strict censorship. The heroes free slaves around the country and help them overthrow the pro-Nazi government plus restore their Queen, who abolishes slavery and calls for free speech.

F. PART TWO – The seven JSA members next travel to a fictional mountaintop country in the Balkans. This country is divided by a Civil War with one side being Royalists who practice the worst kind of Aristocratic oppression and the other side being rabid Revolutionaries who slaughter anyone even remotely suspected of Royal sympathies. This divided state of affairs has left the country vulnerable to a planned invasion by Mussolini’s Italy. The heroes battle the most intolerant and blood-thirsty elements of both sides, following which a truce ends the Civil War so the nation can stand united against the invading Fascists.

G. PART THREE – Next the seven heroes go to a fictional Pacific Island nation conquered by Imperial Japan. The island’s people were still living in a very unadvanced state. In real life back then various Pacific islands still had populations practicing head-hunting, etc so don’t whine that this would be racist. The Imperial Japanese occupiers would be exploiting the native population’s superstitions and fear of technology to use them against the Allied Nations. The Justice Society would free the island from Japanese rule.

4 responses to “JUSTICE SOCIETY 20: A CURE FOR THE WORLD”