This superhero-hungry world can’t get enough of these looks at the very FIRST superhero team in history: DC Comics’ Justice Society of America. This examination of their World War Two-era stories continues. FOR PART ONE CLICK HERE

Title: A MOVIE THAT CHANGED A MAN’S LIFE

Synopsis: Jason L Rogers is a wealthy industrialist who periodically transforms – without his knowledge – into a super-powered being called the Monster. This is due to a freakish set of medical circumstances regarding him and his unborn twin brother in utero. 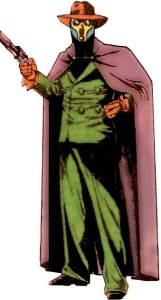 The Justice Society of America is called in to stop the Monster’s crime spree. They battle the villain as he robs banks, dynamites factories, steals payrolls, muscles in on the steel industry and threatens to blow up a dam if he is not paid extortion money.

Our heroes also shut down some of the Monster’s more elaborate plans, like raiding high society get-togethers, gassing the attendees and stealing all their jewelry and cash. In addition the JSA defeats the villain’s racket of kidnapping the wealthy, having their faces surgically changed to make them hideous, then demanding money to have their faces fixed.

In the end the Justice Society and Jason Rogers watch the home movie that his wife died watching earlier. The movie captured one of Rogers’ transformations into the Monster, which caused his wife to die of a heart attack. Jason transforms again but dies when struck by his own gun’s ray-blast.

A. For my revised lineup of heroes this time I would rotate the original Green Lantern back in as this issue’s replacement for the unbearable Johnny “Jar Jar Binks” Thunder. And I would always use Hawkgirl instead of Hawkman.

B. Since the Doctor Fate and Sandman chapters were cut due to wartime paper shortages I would omit Dr Fate and the Spectre instead to rob the JSA of two of their most powerful members to up the tension. My roster would be: Hawkgirl, Doctor Midnite, Green Lantern, Wonder Woman, Sandman, the Atom and Starman.

C. As usual I would also have Wonder Woman actively taking part in the adventure instead of the absurd way they had her serving as the JSA’s secretary.

D. I would, as always, keep the heroes together AS A TEAM instead of separating them for individual adventures like in the real story.

E. PART ONE – The Justice Society would fail to stop the Monster from robbing payrolls from and sabotaging a few of Jason Rogers’ varied businesses. Next the villain demands extortion money in exchange for NOT blowing up a dam and thus flooding the entire countryside near it. The JSA mounts a trap during the proposed exchange of ransom money but a battle with the Monster results. He destroys the dam and our heroes are forced to repair it and rescue victims, letting the Monster escape.

F. PART TWO – The Monster takes to raiding high-society get-togethers and gassing everyone unconscious. While they are out cold he and his thugs steal all their jewelry, cash and artworks, then leave. When the wealthy attendees come to, they realize that their faces have all been transformed into variations of the Monster’s own face thanks to his gas. He demands ransom money to provide the cure. The JSA intervenes and catches many of the Monster’s troops but after another battle he himself escapes.

G. PART THREE – Next the villain begins muscling in on the entire steel industry, threatening the Allied Nations war effort. While our heroes try to stop him his plan rolls along. Ultimately the Monster offers to cooperate with the highest bidder: if the Axis Nations offer him more he’ll continue harming the U.S. steel industry. If the Allies offer him more he’ll let the flow of steelwork resume. This time our heroes capture the Monster, make him watch the movie where he – as Rogers – transforms. The Monster would break free, fight, but die when Green Lantern causes his raygun to hit him instead of his targeted JSA members.

10 responses to “JUSTICE SOCIETY 18: THE MONSTER”