For this superhero-crazed world it’s the very first superhero team in history: the Justice Society of America. FOR PART ONE CLICK  HERE 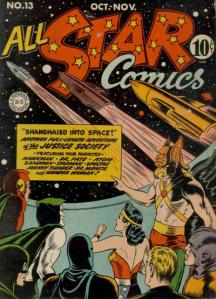 Synopsis: Der Fuhrer and the Japanese Emperor are discussing their outrage over the defeats their forces have suffered at the hands of the Justice Society of America. Grasping at straws the Axis leaders okay the plan of Gootsden, a German rocket scientist. (And since this was written in 1942 it’s interesting to note that there was at least pop culture speculation about a German rocket program that early.) 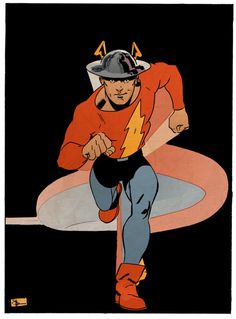 Graf Gootsden has Nazi agents gas/ suffocate (the comic book says both at different times) the Justice Society members in their headquarters, then immediately shoot them into space. The spacecraft used to exile the JSA from Earth range from conventional rockets to flying saucer-type vessels, another interesting touch.

The Justice Society members battle hostile aliens and/ or monsters on all the planets of our solar system then manage to make their way back to Earth in Gootsden’s ships. Next they round up his ring of agents in the U.S.

A. My revised hero lineup would substitute the original Flash for the Spectre since it makes no sense for the Spectre to be rendered unconscious AND to be unable to quickly return the entire JSA back to Earth. I would also substitute Hourman for Johnny Thunder since I really cannot stand Johnny “Jar Jar” Thunder.

(Now that the group has a real female member in Wonder Woman I would stop using the original female Red Tornado as Johnny’s substitute.)

B. I would, as always, keep the heroes together AS A TEAM instead of separating them for individual adventures like in the real story.

C. I would revise Graf Gootsden into a much grander villain, sort of a Graf Zeppelin of space.

D. PART ONE – The story would open up with Gootsden and his crew arriving back in Germany after a multi-year exploration of our solar system in the Count’s/ Graf’s massive spaceship. It would be like when ancient explorers of the Francis Drake or Balboa type returned from their expeditions.

E. PART ONE CONTINUED – While being feted by Hitler and company, Graf Gootsden would explain that he left small Nazi colonial detachments on inhabited planets in Earth’s solar system after negotiating alliances with the aliens on them. Gootsden would volunteer to trap and eliminate the Justice Society.

F. PART ONE CONT’D – Instead of the real story’s pointless bit of capturing the JSA and then sending them in individual vessels to each planet of our solar system, Graf Gootsden would have a spaceship land near the Justice Society’s HQ. When the heroes investigate it, they would be knocked out like in the real story but the craft would immediately fly off to plunge into the sun, ensuring the deaths of even the most powerful JSA’ers.

G. PART ONE CONT – The heroes would revive eventually and somehow manage to divert the spacecraft from its path of solar destruction. Venus’ gravity would pull it in for a crash landing. Then the JSA would help Queen Desira and her Venusians fight the evil giants, who would be allied with the Nazi detachment.

H. PART TWO – With several weeks gone by, Gootsden would note the way popular rivals to Hitler tend to get killed and would head with his crew to his moon station to study the monsters he brought back from his interplanetary travels. Meanwhile the grateful Venusians would upgrade the vessel that trapped the JSA into a liveable spaceship that can be piloted.

I. PART TWO CONTINUED – Wonder Woman would pilot the vessel but since the craft was originally designed for just a one-way trip into the sun it would be hard to control. The heroes would overshoot Earth and Mars and wind up on Jupiter, where they would help defeat the giant mechanical men and their Nazi allies.

J. PART THREE – On their way back to Earth the JSA would stop off on Mars to help the good Martians defeat the evil Martians and their Nazi allies. From there they would attack Graf Gootsden and his crew on their Dark Side of the Moon base. Gootsden would unleash his monster specimens against them (so the heroes could fight examples of all the monsters that were on the other planets that my revised story skipped over).

K. PART THREE CONCLUDES – The Justice Society would defeat all the monsters and would escape in their former prison ship while Graf Gootsden and his crew die as the moon base explodes or something similar. The JSA would be welcomed back with much fanfare after being MIA for months.