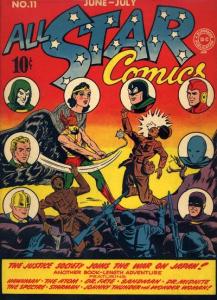 Title: THE JUSTICE SOCIETY JOINS THE WAR ON JAPAN

The U.S. government grants the Justice Society full status as a military unit and the heroes spring into action once again against Axis forces.

A. As in all the previous stories I would have used the original female Red Tornado instead of the annoying Johnny “Jar Jar” Thunder and I would have had the JSA members working as a team, NOT just sent on individual missions.

B. Rather than have the heroes scattered around the Pacific Theater and America’s West Coast I would have had them all stay together to drive off a fictional Imperial Japanese amphibious invasion of California, Alaska’s Aleutian Islands and Hawaii.

C. PART ONE – In California, which is being invaded by the Japanese via land and sea, Shiera Sanders is working at a military hospital alongside Dr Charles MacNider (Dr Midnite’s secret identity) and also meets Diana Prince. Wonder Woman meets the JSA through Shiera like in the original story. The Justice Society assembles and drives off the Japanese invasion of California.

D. PART TWO – The Justice Society spearheads the retaking of Aleutian Islands that have fallen to the Japanese.

E. PART THREE – The JSA liberates the American Territory of Hawaii, which in this fictional context was invaded and occupied even before the Japanese invaded California and Alaska’s Aleutian Islands.