JUSTICE SOCIETY 8: 500 YEARS INTO THE FUTURE

Some more kid-friendly holiday season content with this 8th look at the very first superhero team in history: DC Comics’ Justice Society of America. FOR PART ONE CLICK HERE 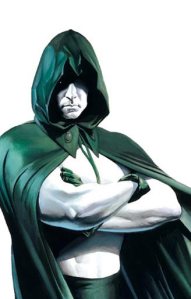 Synopsis: Justice Society of America members save a handful of War Department scientists from being abducted by Axis agents. Afterward, one of the scientists uses his newly invented time machine to send the JSA to the year 2442 to secure future technology. That technology will allow 1942 scientists to devise a high-tech national defense system that keeps mainland America 100% safe from aerial attacks.

In the far future the Justice Society members fulfill their quest despite clashing with Defenders (high-tech cops of the 25th Century), with a genetically engineered race of giants, with a race bred to live on the ocean floor and with aliens from a planet called Ultima.

Our heroes return to 1942 with their objectives achieved. The War Department scientists apparently say “Screw potential paradoxes!” and use 2442 science to safeguard the continental U.S. from aerial attack.

A. As in all the previous stories I would have used the original female Red Tornado instead of the annoying Johnny “Jar Jar” Thunder and I would have had the JSA members working as a team, NOT just sent on individual missions.

B. Rather than just have Batman and Superman being used purely as “click-bait” on the cover I would have had them take part in the actual story along with all the other JSA members. I would also have Hourman on hand since all the others would be involved in such a crucial mission.

C. PART ONE of the story would start with Batman, Flash, Green Lantern and Hourman arriving at the War Department Laboratory to defeat an Axis commando team who raided the place planning to abduct scientists.

D. To avoid the obvious paradox problems inherent in going forward in time to get science that should not be known in 1942 I would tell it like this: The War Department scientists would have paniced when the Axis team attacked and would have fled to the year 2442 in the experimental time machine. They would have done this to avoid being taken and tortured into working for the enemy.

E. The quartet of heroes who saved the scientists would stay in 1942 to safeguard the time machine and those scientists who did not flee to 2442. The rest of the JSA would travel to the 25th Century to find and bring back the 20th Century scientists.

F. Our 9 heroes would arrive in 2442, but due to an error in calculations would arrive several days AFTER the fleeing scientists. The JSA members would need to track down and rescue the men, who by now got separated to scattered locations.

G. The rest of PART ONE would find the Justice Society clashing with Defenders, the advanced cops of the future. After eluding the Defenders the JSA would use 2442’s “Televisabrary” (like they did in the real story) but in this case to track down the missing scientists. The 1st one would be in jail being guarded by the Defenders. Our heroes would mount a raid to free him AND to grab flying belts for the JSA members who can’t fly, like Dr Mid-Nite, Red Tornado, Atom and Sandman.

I. PART THREE – While trying to rescue the 4th scientist from the Shrine of Science in the City of Knowledge in the real story, the villain from Johnny Thunder’s portion, Black Butch, would abduct the guy first. He would escape with the captive on a spaceship bound for Planet Ultima. Superman, the Spectre and Starman would follow the ship to Ultima where they would save the 4th scientist. Meanwhile the other JSA members would save the 5th scientist from the subaquatic city called Oceania.

J. With all the 1942 scientists and our heroes safely back in their proper time period the experimental time machine would wear out and break down. The scientists would finish their work on the aerial defense system for America using just the work they had already started. +++

4 responses to “JUSTICE SOCIETY 8: 500 YEARS INTO THE FUTURE”