Time for more Christmastime kid-friendliness with the 6th installment of the FIRST superhero team in history: DC Comics’ Justice Society of America. FOR PART ONE CLICK HERE 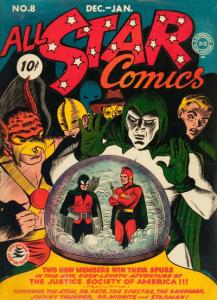 Note: First appearance of Wonder Woman, but in her own separate story.

Synopsis: Starman is being welcomed to the Justice Society of America when suddenly another superhero, Dr Mid-Nite, arrives unexpectedly with his new chemical concoction – Solution K. This solution will restore the sanity of assorted witnesses to heinous crimes, witnesses driven mad by drugs devised by a mysterious villain called Dr Elba.

The men responsible for those crimes were not prosecuted because of the sudden wave of madness afflicting witnesses set to testify. Armed with Dr Mid-Nite’s Solution K the Justice Society and Dr Mid-Nite revisit the crazed and institutionalized witnesses.

Those witnesses are injected with Solution K, which restores their sanity. The JSA once again rounds up the criminals who escaped prosecution, like blackmailers, jewel thieves, racketeers, political saboteurs and thugs armed with radio-controlled lightning.

Dr Mid-Nite exposes Dr Elba as a psychiatrist who runs an insane asylum where he used inmates as guinea pigs to perfect his insanity-inducing drug. Dr Elba falls to his death fighting Mid-Nite. Dr Mid-Nite joins Starman as the newest Justice Society members.

A. As in the previous stories I would have used the original female Red Tornado instead of Johnny Thunder, the Jar Jar Binks of the JSA. She at least wore a costume and did her own fighting.

B. Given that the huge page count in these Golden Age comic books could accommodate multiple stories today I would once again separate this overly long tale into three separate stories.

C. Story One – I would keep this tale largely the same, with Dr Mid-Nite arriving with his Solution K while Starman is being inducted. The JSA would cure the “insane” witnesses and round up the criminals despite interference from Dr Elba. At story’s end Dr Mid-Nite would be inducted just like Starman but the mysterious Dr Elba would still be at large.

D. Story Two – The previous story would have seen the more common criminals getting rounded up. This one would feature Dr Elba setting his sights higher and using his insanity-inducing drugs to sabotage a major political campaign. At the end of this story Dr Mid-Nite would expose Elba, who would fall to his death in the tussle.

Story Three – “The Lightning Makers” would be the villains in this stand-alone tale. The crooks wielding lightning-generating weapons weren’t utilized effectively in the real story so I would feature them in their own tale. They would fight the JSA with their lightning weapons when our heroes try to stop their crime spree.