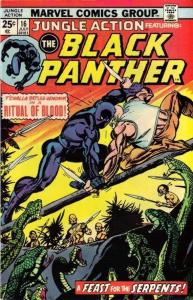 With Marvel’s Black Panther in theaters right now Balladeer’s Blog will take a look at an angle of Prince T’Challa’s run that is a bit overlooked. Panther’s Rage has been covered extensively as have other aspects of this Avenger’s career.

I will be taking a look at the war between the Black Panther’s kingdom of Wakanda and the Sub-Mariner’s realm of Atlantis in the pages of The Defenders in the summer of 1980.

Throw in Foolkiller to this already volatile mix plus a potential shift in the balance of the world’s vibranium reserves and stir.

This time around my script-doctoring extends to virtually the entire issue of The Defenders # 84. It’s easy to see why The Defenders comic book was financially iffy by this point in the late 70s early 80s. In researching these stories for this series of blog posts I couldn’t believe how many issues ended with readers probably thinking “So, did anything really happen this month? Well, no … Again.”

In this particular installment I rewrite the whole damn book to present the breakout of a war between Marvel’s two greatest hidden realms – the Black Panther’s Wakanda and Namor’s Atlantis – with Foolkiller and the rest of the Defenders caught in the middle.

Instead of just Doctor Strange, Namor and Sub-Mariner celebrating in Atlantis after the Big Three’s defeat of (yawn) the Unnameable I would have featured ALL the Defenders down there celebrating. Reference could be made to them having been there for several days, as Namor makes a rare statesmanlike attempt to sow closer ties with his most frequent allies from the surface world at that time.

So, Valkyrie, Clea, Hellcat and Foolkiller would be partying and sight-seeing in Atlantis as well. Plus Hulk would be in his Bruce Banner form and be reasonably sedated. There would be the usual cross-talk and chit-chatting and at one point Foolkiller and Valkyrie would wander off together. (I repeat – I am NOT trying to set up a romance between the two, I just find Valkyrie to be the Defender that Salinger would feel most comfortable with.)

The pair would exchange character-developing dialogue while Clea and Hellcat engage in Patsy’s usual shallow gibberish and Dr Strange asks Prince Namor if everything is okay. He has seemed distracted since their return and Strange couldn’t help noticing that Lord Vashti and various aides frequently consult with him in low whispers.

Sub-Mariner confides in the Defenders that in his prolonged absence in Tunnelworld some of his cabinet and military men showed bad judgment. I would have it so that Namor has been having Atlantean forces scour the entire ocean bottom to stake out strategic points for research, sub-sea farming and defense.

Some of his deputies would have overstepped their bounds when vibranium was discovered at the base of a South Pacific island which turned out to be Kiber Island. By this point Wakanda would be claiming the island as a protectorate ever since the Black Panther’s clash with Kiber himself. Atlantis would have tried staking a claim on the vibranium rights to increase its financial pull with the surface world.

One thing would have led to another to the point where both nations have army detachments all over and around Kiber Island. (SPOILER: In a few issues we learn that the Mandrill has made deals with ambitious subordinates of both Prince Namor and Prince T’Challa. He will be getting rich supplying weapons to both sides – many stolen from each other’s kingdoms – plus has plans to make off with a sizeable chunk of vibranium, too.)

The clash between Atlanteans and Wakandans in the REAL comic book over smuggled goods would in my version become a confusedly provoked battle between the Wakandan and Atlantean armies at Kiber Island. When Namor finds out he talks the Defenders into accompanying him to the site for solidarity and any advice they may have. The island would be surrounded by media from various nations covering the international tension.

T’Challa would also be on his way to the area and – as we would later learn was part of the Mandrill’s plans – it seems as if the Atlantean army attacks T’Challa’s air ship and the Wakandan army attacks the submarine with Namor and the Defenders on board.

Chaotic, butt-kicking action would break out below the surface and on Kiber Island with Subby vs the Black Panther and with the Defenders caught fighting BOTH armies under the sea and on the island. Foolkiller would be in his usual battle-crazed mode, agilely leaping and rolling around and blasting Wakandans and Atlanteans with his Purification Gun’s energy rays.

A nuclear missile (which Mandrill would have ensured was mistaken by the rest of the world as being either from Wakanda or Atlantis) would be detected heading for Kiber Island, prompting a temporary cease-fire.

The Defenders would get all the Wakandans and Atlanteans off of the island while T’Challa would direct Sub-Mariner toward the missile, diverting it, but the explosion in the ocean would cause a tidal wave, nearly wiping out all the buildings on Kiber Island.

To the confusion of all our heroes various countries around the world would already be divided, with some having been informed by “sources” that Wakanda caused the nuke and others having been fed info blaming Atlantis. The two scientifically advanced kingdoms would be preparing for all-out war with the Defenders knowing they must somehow stop it before other nations get drawn in. +++

I WILL ADD THE NEXT INSTALLMENT IN THE NEXT DAY OR TWO AS TIME ALLOWS.

16 responses to “MARVEL’S BLACK PANTHER: WAR BETWEEN WAKANDA AND ATLANTIS”