Here’s Balladeer’s Blog’s look at bad movies with a New Year’s Eve theme. As usual, full-length reviews of these films can be found on my Bad Movie page. 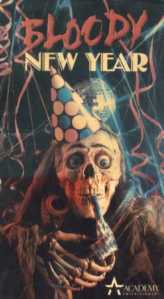 BLOODY NEW YEAR (1987) – Also released under the title Time Warp but it’s grisly enough for the more explicit title. A handful of British boaters who are fleeing a family of soccer hooligans (no, really) wind up on an island with a deserted hotel that’s been decorated for a New Year’s Eve party since the 1950s.

This Norman J Warren film stars nobody and borrows heavily from Sam Raimi’s original Evil Dead in terms of its imitation “Deadites” and its POV tracking shots. It also features a killer who emerges from a movie being watched, a monster who climbs out of a tablecloth, homicidal kitchen utensils, indoor snowfall, laughing shrubbery and living walls.

All the chaos is being caused by hapless souls who have been trapped in limbo for decades and will do anything to get out or to drag others into their hellish undead existence with them.

Bloody New Year is a neglected bad movie classic that has all the little extras that separate monumentally bad films from the mere pretenders. An enjoyably catchy opening song called Recipe for Romance adds to to the fun if you’re like me and get a kick out of truly awful movies with goofy but memorable songs. And the two scenes with sentient and deadly fishing nets come across like the towel-in-the-face bits from the Naked Gun flicks.

This movie is wildly enjoyable but a bit too violent for many viewers. It’s hilariously illogical and loaded with unbelievably lame acting, a pointlessly extended period with no dialogue and a kind of “Haunted House on Acid” appeal.

You’ll enjoy watching the filmmakers piss away the few good ideas they had and undermine their movie’s atmosphere by having most of it set DURING THE DAY like The Newlydeads. For added fun you can pretend the castaways are various characters from Lost so you can really enjoy the scenes where they meet their gruesome ends. “Take THAT, Locke, you smiling jackass!” 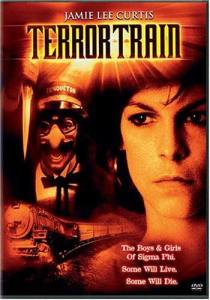 TERROR TRAIN (1980) – A New Year’s Eve slasher film set on a train carrying a load of partying passengers who plan to ring in the New Year in each time zone of the United States.

As required by law at the time, Jamie Lee Curtis starred since it was a slasher flick with a seasonal theme. (Look under the Federal Halloween, Halloween II and Prom Night Act of 1980 if you don’t believe me) A few years earlier Curtis and her college buddies played an initiation trick on a freshman by tricking him into bed with a female corpse. The guy had a nervous breakdown from the ugly near-necrophiliac experience (like sleeping with Barbra Streisand must feel) and is supposedly still in a mental hospital because of it.

Curtis and company are among the partiers on the Auld Lang Syne Express mentioned above and a ridiculously costumed slasher (guess who) begins knocking off her college friends as the train rolls across the countryside. Veteran actor Ben Johnson plays the heroic Train Conductor standing in for Dr Loomis in this flick and David Copperfield himself plays a professional magician … and is utterly unconvincing, oddly enough.

Viewers are forced to endure Copperfield’s act which is trite and boring but it makes Terror Train one of the Big Four horror film turkeys that use pointless magician’s acts as filler. (The other three being The Body Shop, Boardinghouse and Funhouse.)

This baby has not aged well and is fun to laugh at because of the ubiquitous cliches, dull death scenes, lack of logic and its Sleepaway Camp style twist ending. The scene where the killer’s costume looks like a crazed Gene Shalit getup is a lot of fun.  All this plus a young Vanity! They’re actually doing a remake of this, believe it or not. 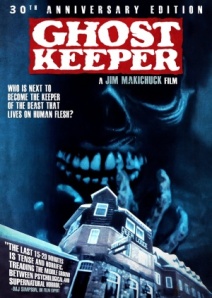 GHOSTKEEPER (1981) – One of those infamous Canadian tax shelter movies of the early 1980s, so you know what you’re in for: the usual slapdash storytelling, low production values and a tale that would have been better handled in the old glory days of radio decades ago.

On New Year’s Eve two men and a woman get stranded in the Rocky Mountains following a snowmobile crash. They seek refuge in a creepy old boardinghouse run by the female Joe Spinnell, Georgie Collins. Collins plays an absolute psycho who has two creepy sons, one of whom is a host for the cannibalistic Native American monster called the Wendigo.

The Wendigo son is kept in the basement where its mother and brother have been feeding people to it for years and our three stars battle to stay alive. There’s also a struggle for freedom involved because the demented woman (who springs a twist that is so lame I wouldn’t dream of spoiling it for you) is looking for someone to take over her burden of overseeing the Wendigo’s captivity in the haunted boardinghouse. All this plus a Texas Chainsaw Massacre ripoff – uh, I mean homage. 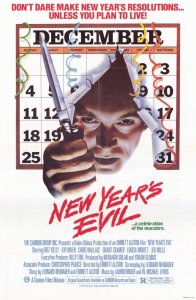 NEW YEAR’S EVIL (1980) – This is another of those holiday-themed slasher movies that followed in the bloody footsteps of the original Halloween. See my review of the Thanksgiving slasher movie Slasher In The House for more on this odd sub-genre.

Kelly is way too old for this role, since the character is presented as being the hippest thing in punk (Hilarious!). Nothing would have been lost by instead making Blaze an over-the- hill rocker trying desperately to revive her career by reinventing herself as a punk diva.

Well, that’s not true, I guess. A large amount of the unintentional laughter this film generates would be lost and that’s really the only reason to watch it.

KIP NIVEN, David Niven’s son, plays our slasher, who calls himself “Evil”. He calls Blaze’s show to play tape recordings of his murders, which he plans to commit as the New Year arrives in all four time zones of the U.S., synchronized with Blaze’s show, which will also ring in hourly New Year’s Days as it plays throughout the night.

Yep, it’s the same type of plot as in that other New Year’s Eve slasher, where a bullet- train is making its way across the country, timing its arrival in each time zone to coincide with midnight, with a slasher striking at each playing of Auld Lang Syne.

GRANT CRAMER, actress Terry Moore’s son, plays Blaze’s unstable son, who is very clearly being set up all along to be the new slasher in a  New Year’s Evil sequel that never came. TERI COPLEY, the We Got It Made star herself, plays a potential victim of our slasher.

SHADOW and MADE IN JAPAN play themselves, rock bands performing in Blaze’s New Years’ Dyin’ Eve, or whatever she wants to call it. Now that Shadow and Made In Japan are so famous, it’s interesting to see their humble beginnings. (I’m kidding!)

Other things to love in this flick include:

a) Match Game bimbo Louisa Moritz as one of the victims

b) the hopelessly lame songs, especially the title tune, which we get to hear 3 times during the movie,

c) the bizarre, quasi- flirtatious dialogue between Blaze and the detective assigned to get to the bottom of these New Year’s Eve killings

and d) the show-stopping WTF interlude where “Evil” engages in a looooong running fight with a biker gang for no reason except padding the film’s running time and to sprinkle in a few cutesy cult movie scenes when their battle takes them into a Drive- In.

I recommend this film for bad movie fans who don’t like heavy gore because this film’s violence is so low- key you’d swear it must be a made- for tv movie (at least until you see Teri Copley’s boobs on display).

SPOILER ALERT – One thing the movie does right is remember the fact that, since Hawaii is part of the U.S., the New Year isn’t fully here until it’s midnight in Hawaii, setting up the film’s climactic slaying. “Mele Kalike MURDER” for you Quinn Martin fans out there!

10 responses to “BAD MOVIES WITH A NEW YEAR’S THEME”