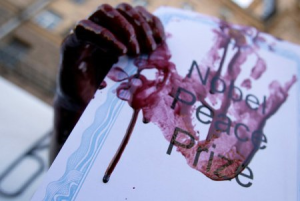 Years ago Balladeer’s Blog ran a post examining which Nobel “Peace” Prize winner killed more people: Republican Henry Kissinger or Democrat Barack Obama. It used to be too close to call but Obama’s recent fathering of the Iranian Nuclear Weapons Program has since given him the theoretical edge.

President Donald Trump hasn’t killed enough people yet to be in the running for a “Peace” Prize but bloodthirsty figures in America’s Military Business Machine keep trying to pressure him into a higher body count. 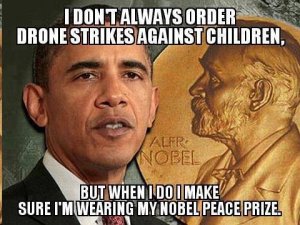 Anyway, with blood-soaked figures like Barack, Henry and even Yasser Arafat winning the Nobel Peace Prize you can see how that prize has become a meaningless, dark-humored joke.

Add the fact that Obama got his Peace Prize in 2009, when he was so new to the presidency that he had done nothing to deserve it. He didn’t deserve the presidency, either, for that matter. But the media liked the way his shallowness mirrored their own, so there you go.

In virtually UNPRECEDENTED fashion a former rep of the Nobel Peace Prize Committee – Geir Lundestad – admitted in his book that the Committee gave the new president the Peace Prize just to try to boost him politically. No true criteria were used. Who knew they awarded Nobel Prizes “on spec” as it were?

“In a break with Nobel tradition, the former secretary of the Nobel Peace Prize committee says the 2009 award to President Barack Obama failed to live up to the panel’s expectations.
Geir Lundestad writes in a book to be released on Thursday that the committee had expected the prize to deliver a boost to Obama. Instead the award was met with fierce criticism in the U.S., where many argued Obama had not been president long enough to have an impact worthy of the Nobel.
Speaking to the AP on Wednesday, Lundestad said he didn’t disagree with the decision to award the president but the committee “thought it would strengthen Obama and it didn’t have this effect.”
Hey, not even people who voted for that weak, inept and crooked little man Obama got what they hoped for from the “Community Organizer” (LMFAO).