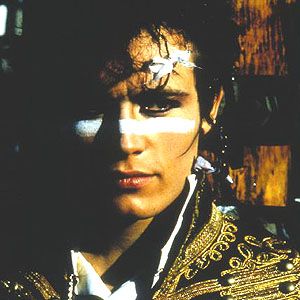 Since we just passed the one year anniversary of the death of Prince a few readers emailed me to mention it. Some even asked the time-honored question about why we wait until people are dead to give them a shoutout.

So I figured I would do a shoutout to an often neglected Prince-like figure from the past: Adam Ant – real name Stuart Leslie Goddard. From his first appearance in the surreal Punk film Jubilee in the late 70s up to the early 1990s this interesting figure turned out some pretty memorable music and videos. He has since produced a few unique stage presentations, too.

Adam Ant is a prime example of the bittersweet connection between creativity and insanity. Unlike many other  entertainers  who engage in long battles against various addictions Ant’s major vice was his own periodic madness. And I don’t say that as an insult, but as a very odd compliment. (And I know about his stays in a few mental hospitals and his being diagnosed as bi-polar. I repeat – I’m not insulting him. I’m sincerely complimenting him.)

Anyway, thinking about Mr Goddard’s  comparative – I repeat – COMPARATIVE – tendency to get highs from his own creativity rather than booze and such put me in mind of Goody Two-Shoes. When you consider the presence in this video of British Scream Queen (and all-around goddess) Caroline Munro aka Stella Star then this song was a no-brainer.