THE GREEN HUNTSMAN – The Green Huntsman is an interesting example of the many figures who started out as folklore before being committed to the printed page in horror stories.

The figure eventually known as the Green Huntsman has its origins centuries ago. Originally a mortal man, this huntsman was a Castilian nobleman who had a perfect body but a very ugly face. As the tale was inevitably embellished it got to the point where the man freakishly had just one large green eye above the nose of his otherwise handsome face. 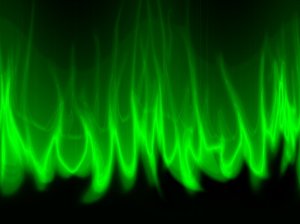 The nobleman was obsessed with tracking down and marrying a mythical woman called the Christmas Bride who could only be found on Christmas Eve. This woman was incredibly beautiful but blind. The Green Huntsman wanted her as his bride not only because she would not be able to see how hideous he was, but, more importantly, she was destined to give birth to a son who would become the New Charlemagne, who would unite all Europe under one ruler.

Clad in his all-green hunting outfit the Green Huntsman would ride forth every Christmas Eve accompanied by his hunting dogs. One year the whip he used to urge his horse onward contained a hair from the head of the Virgin Mary herself. (Remember, there was a lucrative business long ago in selling fake relics like pieces of wood from the “true” cross, plus the bones or other items from various saints.)

That hair from Christian mythology’s Blessed Mother supposedly would act as a divining rod, and the bristles on the whip would point the way to the Christmas Bride. The Green Huntsman had paid an enormous amount of money to the Pope himself to obtain the hair.

Different Popes are mentioned, depending on the time period the story is set in. The 1841 version named Pius the Sixth as the man.

Regardless, the hair from the Virgin Mary’s head in the whip led the Green Huntsman to a convent of all places that Christmas Eve after sunset. In his malevolence and his obsession with seizing the Christmas Bride the huntsman rode his horse right into the convent, accompanied by his dogs.

Ignoring the protests of the nuns, the Green Huntsman roughly pushed them all away and followed his guiding whip to a room occupied by a beautiful novitiate. The girl was in a deep sleep, as the prophecy stated she would be, and, miraculously, she did not wake up the whole while the Green Huntsman abducted her and returned to his castle home with her.

The villain had his reluctant guest placed in his own handsomely appointed bedroom, and when she at last awoke on Christmas Day he eagerly welcomed her to his home. The girl was not blind like the legend had claimed, however, and reacted to the Green Huntsman’s one-eyed face with screams and insults.

Furious, the huntsman killed the girl in a rage, then – in regard to the Virgin Mary’s hair that was supposedly in his whip and which had seemingly betrayed him – he cried out “Cursed be this hair and the head it grew upon!”

In his crazed fury the Green Huntsman rode back to the convent from which he had kidnapped the girl and burned it to the ground. In some versions he killed all the women inside, too. After that he killed himself with the same sword he had used to murder his intended bride.

From that time on the Green Huntsman burned in Hell, being let loose by Satan only on certain occasions to drag other victims down into Hell. The variations of the tale feature different types of designated victims for the infernal figure:

** Any other men foolish enough to go in search of the Christmas Bride.

** Anyone who tries to double-cross Satan after selling him their soul OR who offers their children’s souls to him then backs out of the deal.

Ingraham’s short story altered other elements of the usual tale, like making the Green Huntsman a one-eyed, demonic imp in disguise.

At any rate NOTHING could stop the Green Huntsman from taking his intended target back to Hell with him to share in the torments of the damned. The one-eyed figure rode along in his green outfit, atop a coal-black horse and with a pack of demonic hunting dogs, sometimes black, other times green like their master. He could temporarily paralyze anyone with his gaze.

The Green Huntsman wielded green flames to help him carry out his tasks and to subdue any innocent people who tried to keep him from his target. Some variations depict the figure and his abductee being pursued by would-be rescuers who are stymied when the huntsman and his victim disappear in a raging green fire.

Filed under A CHRISTMAS CAROL, Mythology