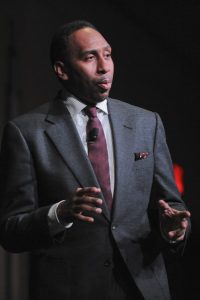 Stephen A Smith of ESPN has joined the chorus of voices pointing out the obvious – that the corporate media was completely in the tank for Hillary “Bugsy” Clinton. Anyone with common sense noticed how extreme the bias was but worshippers of Hillary “No Billionaire Left Behind” Clinton live in a fantasy world.

That pantsuited gangster robbed the nomination from Bernie Sanders, as proven by Wikileaks, which also laid out Hillary’s criminal culpability. Anyway Stephen A Smith set straight the whiny white boy at his side regarding media bias, saying said media “literally” tried to win it for the Hillarytron HERE

And I’ll be adding the many, many other stories about the media acknowledging its ridiculous smugness.