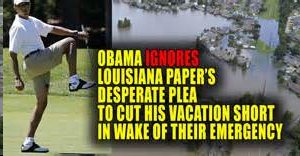 Barack Obama truly is garbage. Not only did this squirrely, wormy little man wait until he was DONE with his golfing vacation before visiting flood-ravaged Louisiana but when the delicate-minded child was pressed a little about his callous attitude toward the human suffering he was ignoring all that time this alleged human being ACTUALLY, REALLY said “I’m out in five months.”

What a scumbag! I know he bubbled and gurgled up from the cesspool of Chicago politics but this is a new low even for him. I guess if there’s a crisis on the week before Little Barry leaves office he’ll just shrug and say “That’s the new crook’s worry.”

Yeah, we get it, Barack, you’re even slimier than George W Bush. You have secured the title Worst President In American History. You clinched it long ago. Talk about running up the score. (I figured maybe a sports metaphor might register in the sack of fluids that passes for Obama’s brain.)

I want to remind Little Barry’s supporters that, yes, I know the loathsome George W Bush was callous regarding the Hurricane Katrina aftermath but he got appropriately slammed for it.

You people seriously need to comprehend that BUSH HAS BEEN OUT OF OFFICE FOR YEARS NOW! YOU NEED TO “MOVE ON” LIKE YOU ARE ALWAYS SNIVELING ABOUT. TRUST ME, I WILL NOT BOTHER CRITICIZING OBAMA AFTER HE’S OUT OF OFFICE, LET ALONE CONTINUE WHINING ABOUT HIM WHEN 2024 ROLLS AROUND.

16 responses to “BARACK OBAMA: THE MOST CALLOUS MAN ALIVE!”