** THIS WAS ENTERED REMOTELY – FAMILY TRAGEDY

Foolkiller issue two continues the antihero’s battle with the obscure Marvel villain the Monster Maker, who is using patients in his insane asylum as human guinea pigs to create monstrous abominations.

This issue picks up where we left off: Foolkiller is watching the Monster Maker (Baron Ludwig Von Shtupf) performing a bizarre operation on Man-Thing. MM gives us the full Villain Rant, explaining how he captured the Man-Thing by observing it from afar for months and noticing how emotions seemed to affect it.

He was, conveniently, already running the insane asylum and injected various patients with emotion-altering drugs which, enhanced by their already disordered minds, made them an ideal way of capturing Man-Thing. The chaotic bombardment rendered the creature helpless. Since then he’s been experimenting on the swamp monster just like he’s been doing for years with his patients.

MM has been extracting tissue from various internal spots of the Man-Thing’s anatomy and combining them with the eggs of a human female, then implanting the fertilized eggs back in said females. Many of those women died before Monster Maker hit on the right tissues and technique. Since then he’s built up a handful of Man-Thing/ human monstrosities with the mothers dying in childbirth from the biological trauma. 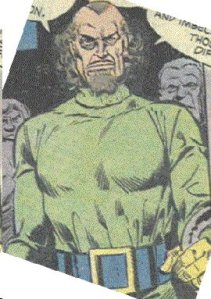 Eventually Foolkiller guns down MM’s thugs surrounding him, blasts through the plexiglass of Monster Maker’s operating arena and frees the Man-Thing. All hell breaks loose with Man-Thing struggling to get out of the insane asylum and Foolkiller trying to catch up with and kill Monster Maker.

Our two heroes wind up battling various monstrous nightmares that MM keeps freeing to sic on them. Man-Thing eventually comes face-to-distorted face with his “children” and their human-halves grow afraid. As even the most casual Marvel fan can tell you “Whatever knows fear BURNS at the Man-Thing’s touch.”

Since these critters are part-Man-Thing that means they cause themselves to burst into flames and die horribly. Their flames set the whole building on fire, too. Meanwhile Foolkiller at last has fought his way through all of the Monster Maker’s creations while freeing all the still-human patients.

Foolkiller has MM cornered. With sirens heard off in the distance the madman surrenders and taunts Salinger that his diplomatic connections will ensure he goes free. Foolkiller, naturally enough, just blasts him to bits with a white energy blast from his Purification Gun like he intended all along.

Salinger then observes aloud that if Spider-Man had killed Monster Maker back when he fought him a few years earlier all the suffering MM caused since then would never have happened. This reaffirms for him the correctness of his judge, jury and executioner approach.

From a distance Foolkiller spots the Man-Thing shambling off into the swamp and decides to make his own exit. +++

I’LL HAVE THE NEXT INSTALLMENT UP IN THE NEXT FEW DAYS.