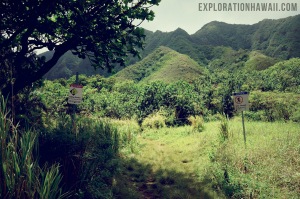 Hi’iaka and her mortal companion Wahine continued crossing the island of Oahu as their quest to reach Kauai resumed after their battle with the gigantic lizard-monster Mokoli’i. The ladies arrived at Kaliuwa’a Valley where Hi’iaka encountered another of the gods who had originally arrived in the Hawaiian Islands with the goddess Pele long ago.

Kauhi was the name of this ancient deity who ruled the rocky mountain peak that shared his name. Long ago Pele had assigned – some would say condemned – Kauhi to remain behind here serving as a sentry. The peak was often called “the watchtower of the heavens” and served as both home and prison to Kauhi.

Tears filled Kauhi’s eyes as he beheld Hi’iaka, whom he had not seen since she was just a child ages ago. The two deities carried on a long conversation as Hi’iaka updated Kauhi on family members he had not seen for a very long time. They discussed Ma’u, sister to the goddess Haumea as well as Kukuena, the goddess who presided over the ceremony of preparing the intoxicating drink awa. (Some sources claim she presided only on those rare occassions when women were permitted to drink awa but others claim Kukuena presided over the ceremony all the time.)

As Kauhi and the goddess talked he stated that he longed to leave his eternal watchpost and accompany Hi’iaka on her travels. Hi’iaka knew this was dangerous conversational territory: Pele – in her anger – had condemned Kauhi to his present position as punishment for some real or imagined slight. It would do neither him nor Hi’iaka any good to tempt Pele’s wrath by having him abandon his post without the fire and volcano goddess’ permission.

As gently and diplomatically as possible Hi’iaka tried to make it clear to Kauhi that they had no choice. Neither of them was powerful enough to defy Pele’s edicts and so he must remain where he was.

Angry at this dismissal of his request to leave his post after all these millenia Kauhi roared in outrage and vowed to accompany Hi’iaka in spite of Pele’s decree binding him to this location. Kauhi followed the departing goddess but with each step he took the ground shook so that trees fell over and rockslides were triggered.

Finally, exhausted in his attempt to break free of Pele’s curse/ command, Kauhi fell to all fours and remains in that position here in the present. The stone form near the mountain wall of Kahana that looks like a man on all fours supposedly represents Kauhi, right where he fell that day. (Though by some accounts it is a dog or a feline creature on all fours.)

Saddened but reminded yet again of the awesome and far-reaching power of her sister Pele, Hi’iaka commanded Wahine to come along with her as she resumed course for Kauai. +++

NOTE: In 1999 the Hawaii State Park Commission shut down Kaliuwa’a Valley and Falls as a tourist attraction and hiking trail when eight people were killed by one of the periodic rockslides that have always plagued the area. In folklore those rockslides were said to be caused by the god Kauhi’s continuing efforts to break free and leave the area.

I’LL CONTINUE THE STORY SOON. CHECK BACK ONCE OR TWICE A WEEK FOR UPDATES.

2 responses to “PELE AND HI’IAKA: EPIC OF HAWAII PART FOURTEEN”