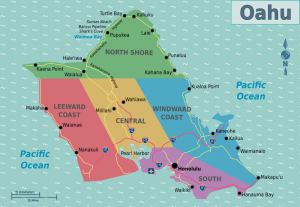 On the Hawaiian island of Oahu near Kualoa the goddess Hi’iaka and the mortal woman Wahine were continuing their quest to reach Kauai. Amid a driving rain the women found themselves attacked by the mountain-sized monster called Mokoli’i. That was where things ended last time around.

The creature Mokoli’i had thick, nearly impenetrable scales all over its body and a long prehensile tail. That plus the monster’s size would have made it a deadly foe at any time but the mo’o had chosen to attack just when the rain was pelting the two traveling women and was reducing visibility for them.

The massive, reptilian Mokoli’i was as much at home in a driving rain as it was in clear weather so it was at no disadvantage due to the elements. Again and again Hi’iaka was barely able to blunt the creature’s attacks on her and Wahine with her divine powers. Mokoli’i was driving the women back at a steady pace until at length they were cornered in a dead-end of high volcanic rock.

Hi’iaka now had no choice but to lunge at Mokoli’i, clinging to its gigantic throat and refusing to be thrown off as she focused her mystical energies on growing to an enormous size so she could battle the beast on equal physical terms. The goddess and the scaly monster grappled like two wrestlers while the rain continued to fall and Wahine stayed safely hidden behind a boulder.

The gigantic Hi’iaka and the deadly mo’o continued their battle throughout the night and into the next morning, by which time the rain had stopped. The goddess had already worn her opponent down and now moved in for the coup de grace. Hi’iaka choked the life out of Mokoli’i, weathering its desperate spasms of resistance until finally it lived no more.

When the exhausted goddess was again capable of movement she tore the dead Mokoli’i’s tail off and tossed it into the ocean where it became a huge stony landmark just off the coastline. That landmark is still there today.

Next Hi’iaka tore apart the rest of the dead mo’o’s body and used all of its scales to form the roadbed for a route through Oahu, and that work of Hi’iaka’s eventually formed the basis for the roadways on the island in the present day.

When that task was completed Hi’iaka shrunk back down to her normal size and, with Wahine at her side, resumed the journey toward Kauai on behalf of her sister Pele. ++

I’LL CONTINUE THE STORY SOON. CHECK BACK ONCE OR TWICE A WEEK FOR UPDATES.

2 responses to “PELE AND HI’IAKA: EPIC OF HAWAII PART THIRTEEN”