ISLAM AND THE POLITICAL LEFT 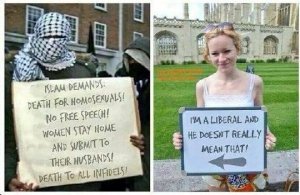 I always have to laugh at the pompous asses who pretend to be Liberals here in the 21st Century. They are anything BUT Liberal as evidenced by their fondness for censorship and for destroying the careers of people who express opinions they don’t like. The left is too lacking in self-awareness to even realize that THEY are the reason people regard Islam with suspicion.

People would have nothing against Islam IF it was treated the same way all other religions are treated, but everywhere Islam has spread in Europe formerly free societies wind up with Muslims tarnishing their host countries with their outdated worldview and barbaric treatment of women. AND IT IS ALWAYS THE LEFT SUPPORTING THEM IN DOING IT! (See the Rotherham Report and the Muslim gangs raping women throughout Europe on New Year’s Eve plus countless other examples.)

5 responses to “ISLAM AND THE POLITICAL LEFT”