THE FIRST BAD MOVIE SHOWN ON THE TEXAS 27 FILM VAULT 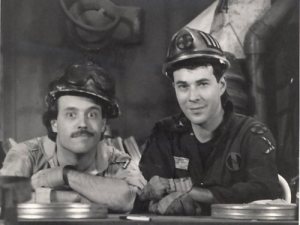 Before MST3K there was THE TEXAS 27 FILM VAULT! Before Joel and Mike lovers of bad movies had Randy and Richard! Before Devil Dogs, Observers and Deep 13 there came Cellumites, giant rats and Level 31! Thanks to my endless research through VERY old newspapers here’s another milestone! Balladeer’s Blog’s latest examination of the sadly neglected cult classic The Texas 27 Film Vault takes a look at the very first bad movie offered up and mocked by Randy Clower and Richard Malmos, on the night of February 9th, 1985! Yes, 1985.

If the only bad movie show you know is MST3K think of: Operation Double 007, Danger: Death Ray and Secret Agent Superdragon. 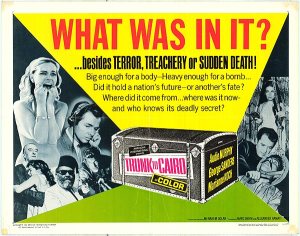 The Movie: Audie Murphy, America’s most decorated soldier of World War Two was okay in westerns or military films but he is laughable as a pseudo-suave James Bond wannabe in this flick. For starters his voice is so mild and his mannerisms so meek that he comes across like Ned Flanders: Licensed to Kill! Menahem Golan (as in Golan-Globus Productions) directed and produced this flick that was distributed stateside by American International Pictures, so this was a royal wedding of sorts in terms of cinematic cheesiness.

Murphy plays Mike Merrick, a CIA agent who is assigned to work with Israel’s intelligence agency Mossad in order to infiltrate an Egyptian base. A neo-Nazi scientist played by the very British George Sanders is working with the Egyptians to build rockets capable of wiping out Israel, Europe and the United States. Marianne Koch portrays Helga Schlieben, the scientist’s (Sanders) daughter.

So we have a CIA agent with a Texas accent masquerading periodically as an Egyptian and a German even though he speaks neither language. GREAT personnel choice by the Agency! We also have the aforementioned veddy, veddy British Sanders turning in a comic opera-level rendition of a strutting German. Throw in various Israelis portraying Egyptians and enjoy! Hans von Brosody actually seems out of place as a German playing a German. Must have been some kind of screwup at Central Casting. 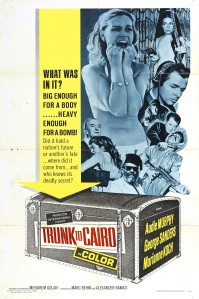 This baby also features HILARIOUS day-for-night shooting, a terrorist attack on sunbathers and supposedly Italian submarines with Hebrew signage on their instrument panels (Oy vey!). The final minutes of this enjoyably awful movie take the viewer from Cairo to Rome, partway back to Cairo and then back to Rome in a thoroughly ridiculous sequence of unlikely events meant to highlight Mike Merrick as an American James Bond. Even the humorless Roger Moore would be able to see how absurd Merrick’s superspy antics are.

Audie Murphy and the other players try to play it all as seriously as if they’re on Masterpiece Theater and completely fail to capture the light-hearted thrills of the 007 films. Unfortunately the script’s periodic attempts at humor could be used to induce vomiting if you accidentally swallow something poisonous.

Very soon Balladeer’s Blog will present another moment from the history of The Texas 27 Film Vault‘s Film Vault Corps – “the few … the proud … the sarcastic”.