After an eventful weekend that saw a new wins record established in the NAIA and the number 1 team in NCAA Division 3 get upset at home by an unranked opponent here are my latest rankings for the divisions of college football covered here at Balladeer’s Blog. 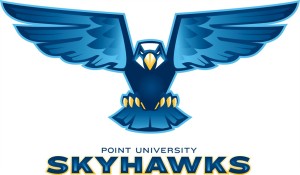 Welcome to the first Saturday of the 2012 college football season! We got to warm up with a few games during the week and now today will see a huge slate of games in two of the divisions covered here at Balladeer’s Blog.

The NAIA’s Point University Skyhawks (logo above) are among the relative newcomers to intercollegiate football taking the field today. Teams like the Concordia (MI) Cardinals, Robert Morris (IL) Eagles and the Siena Heights Saints are still in the early years of their football programs, too.  The Bluefield College Ramblin’ Rams are playing their first intercollegiate game in decades today.

Meanwhile in the NJCAA some teams are starting the season with conference games. The Hutchinson Blue Dragons are hosting the Coffeyville Red Ravens, the Dodge City Conquistadors battle the Butler (KS) Grizzlies and the Garden City Broncbusters travel to take on the Independence Pirates.

Also among the dozens of NJCAA teams kicking off the 2012 season today are “all-nickname” programs like the Vermillion College Ironmen, the Eastern Arizona College Gila Monsters, the Iowa Western Reivers, the College of DuPage Chaparrals and the Scottsdale Fighting Artichokes! (really)

As always, Balladeer’s Blog will be offering a END_OF_DOCUMENT_TOKEN_TO_BE_REPLACED

THIS WEEK THE COLLEGE FOOTBALL SEASON KICKS OFF IN THE DIVISIONS COVERED BY BALLADEER’S BLOG!

Teams like the Hutchinson Blue Dragons (helmet at left), the Jamestown College Jimmies, the William Penn University Statesmen and the Eastern Arizona College Gila Monsters will all begin their season on various days throughout the coming week!

Not only that but the CC Fighting Saints, ranked Number 1 in Balladeer’s Blog’s NAIA College Football Rankings, will kickoff this Friday the 24th at the 23rd- ranked MSU-Northern Lights. The Pima Aztecs travel to face the Phoenix College Bears on Thursday night and the END_OF_DOCUMENT_TOKEN_TO_BE_REPLACED