The setter and defensive specialist was named All-District her senior year, playing for coach Tammy Serbin at WCHS, where she played two seasons after transferring from Parkersburg High School in END_OF_DOCUMENT_TOKEN_TO_BE_REPLACED

KISSIMMEE, Fla.- Although the Palm Beach Atlantic University volleyball team is hoping for as much support in person at the National Christian College Athletic Association (NCCAA) National Tournament this week, those parents, fans, and alumni that are unable to make the trip will have the opportunity to view the games online through a free web stream provided by Webcast America. END_OF_DOCUMENT_TOKEN_TO_BE_REPLACED

VOLLEYDAWG: A QUICK Q AND A WITH CUMBERLAND U’S ANGELYN STANTON 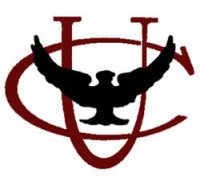 Cumberland University’s volleyball team goes by the nickname Volleydawgs instead of Bulldogs. The Volleydawgs went 24-13 overall and 8-6 in TranSouth Conference play. CU’s Angelyn Stanton was recently named First Team All Conference following a stellar season in which she had 91 kills and 62 blocks in 79 sets. Stanton comes from an athletic family; her father, the late Patrick Stanton, played baseball for the Middle Tennessee State Blue Raiders and her uncle, Steve Sandefur, played football for the West Virginia Mountaineers. The time seemed right to do a Quick Q&A segment with this senior volleyball star. 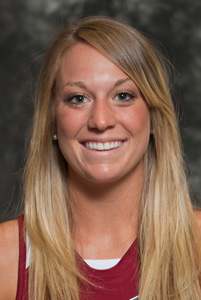 VOLLEYBALL INFERNO: A QUICK Q AND A WITH ALVERNO’S JORDAN NICKELATTI

Jordan Nickelatti, in her first year playing volleyball for the Alverno Inferno, has been named to the Northern Athletics Conference All-Sportsmanship Team. She was a starter in all 25 games and compiled 37 kills (I’ll admit it- I’m all out of cute jokes playing on the volleyball term “kills”), 117 digs (And yes, she remembered to “Call before you dig”) and 19 service aces. Her 5 aces against the Indiana University Northwest Redhawks tied the Inferno’s 5-set-single- match record. Since Nickelatti will be keeping her talents in Milwaukee, it seemed a good time to subject her to some of Balladeer’s Blog’s usual probing, yet inane, questions. 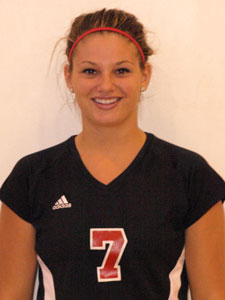 “CAN NOTHING STOP THESE WOMEN?” THE NAIA VOLLEYBALL WORLD WONDERS

When it comes to NAIA volleyball, it’s been the Fresno Pacific Sunbirds’ world and everyone else is just part of the dig-counters. The Sunbirds are coming off a perfect 38-0 season which found the ladies winning a 3rd straight national championship. They also went undefeated at home for the 7th straight season and won their 10th straight Golden State Athletic Conference title. Needless to say they are starting this season ranked number 1.

Having won 110 of their last 112 matches, the Sunbirds volleyball team felt up to the challenge of seeing if I could conduct a lucid interview for once. When I offered to meet the ladies for a face-to-face interview to get the inside story on their team’s phenomenal run, Head Coach Dennis Janzen gave the okay, despite my ice-breaking joke in which I told him I really loved watching reruns of him in The Fugitive and Harry O. Janzen just rolled his eyes. (Maybe he was just peeved that I didn’t mention Richard Diamond episodes) (DISCLAIMER: THE FOLLOWING IS ANOTHER ONE OF THOSE BITS WHERE I PRETEND TO ACTUALLY BE INTERVIEWING THE PEOPLE COVERED IN THE ARTICLE…ALSO NO VOLLEYBALL PLAYERS WERE HARMED DURING THE WRITING OF THIS BLOG POST)

I asked senior All-American Lisa “Worth More Than A” Shilling  how she and her teammates deal with the non-stop pressure of the streak they are on and she replied:

“It’s there in the back of your mind, but it ‘s only what you make of it.”

She also stated the common thread running through the last 3 national championship teams has been the close-knit team chemistry. Shilling, along with Libero Mariah Mandelbaum, is trying to complete her Fresno Pacific career without ever having experienced a season-ending loss. Volleyball newcomers can find out all they need to know about the Libero position by going here: http://www.strength-and-power-for-volleyball.com/volleyball-rules-libero.html

I told Mandelbaum I once wrote a libretto about a Libero who was a Libra and she asked Coach Janzen if she could go. For a quick round-up of the other Sunbirds volleyball players who, if there’s any justice, will soon have a major motion picture made about them, here you go:

Keke Wang, an All-American at two positions. She will play middle blocker and opposite. (As opposed to playing Dan Blocker and similar)

Wang teams with the aforementioned Lisa Shilling to form one of the best middle blocker duos in the sport. Shilling was 2nd Team All American last year and is described by FPU as one of the driving forces behind the team’s success.

Mariah Mandelbaum, comfortable in her role as a “shortstop of volleyball” AKA Libero, led the Golden State Athletic Conference in digs last season.

Sophomores Erica Adachi and Emily Carroll return as the team’s primary setters. This Titanic Twosome combined for 1,482 assists in 2009.

The Sunbirds return the bulk of their 2009 title team but lose two players, including Tiffany Marinos, who has joined the team’s coaching staff. Coach Janzen, proving that for coaches the glass is always half-empty, said the team has a long way to go to get where they need to be and added this vintage example of coachspeak:

“We want to be better defensively. This program defensively has a higher standard than most. We have got to push defensive intensity.”

Do you get the feeling that a perfectionist coach like Dennis Janzen wakes up in the middle of the night in a cold sweat over the 2 games his team has lost out of their last 112?

And the Sunbirds play in the GSAC, which may well be the best volleyball conference in the NAIA, boasting 4 of the nation’s Top 5 teams at the end of last season. Think about that as you absorb this next stat: FPU has won 52 straight against conference opponents.

The Sunbirds have got their eyes on history and if they can win their 4th straight NAIA volleyball title they will stand at the top of the sport along with the only 2 other teams to accomplish that task: the 1981-1984 Hawaii-Hilo Vulcans (Team motto: Live Long And Prosper) and the 1994-1997 BYU-Hawaii Seasiders (Team motto: Our Team’s Nickname Doesn’t Lend Itself Easily To Lame Jokes By Bloggers…That motto may sound a bit unwieldy but it looks great on a T-shirt.) There’s no doubt about it, Fresno Pacific University is to volleyball what UConn is to women’s hoops.

Q: What prestigious organization recently honored the University Of Sioux Falls‘ volleyball program with inclusion on its latest list?

2. The League of Women Voters

3. Balladeer’s Blog with one of those lame Top 20 lists

The correct answer is “4”

Q: On what list did this prestigious organization include USF’s volleyball program?

1. The FBI’s Most Wanted

4. 12 Dangerous Organizations And How They Threaten World Peace

The Correct answer is “3”

Q: How do you earn your way on to this exclusive list?

1. By doing real well in the swimsuit and evening gown competition

2. Playing by your own set of rules but getting results

3. As often as Lindsay Lohan gets arrested

4. Whenever a new Pope is elected

The correct answer is “1”

Q: USF volleyball starts their 2010 season on Sept 3rd against the Dakota State Trojans in what event?

Your score: It doesn’t matter how many answers you got right. Everyone is a winner when USF volleyball takes the floor.

Which of the following is the USF athletics site: