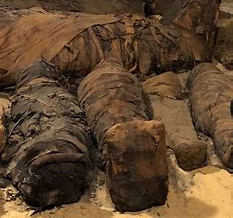 THE UNSEEN MAN’S STORY (1893) – A needlessly neglected mummy tale. At age twenty-eight, a Frenchman named Carigliano arrives in Egypt on assignment from the French government. He has studied Egyptology and is thrilled with his placement.

Gradually, dreams and waking visions propel him to investigate around Thebes. Once there, he discovers the previously unviolated tomb of Queen Amunuhet. Throughout the tomb’s halls and chambers he encounters reanimated mummies which stalk him, intent on killing him. END_OF_DOCUMENT_TOKEN_TO_BE_REPLACED