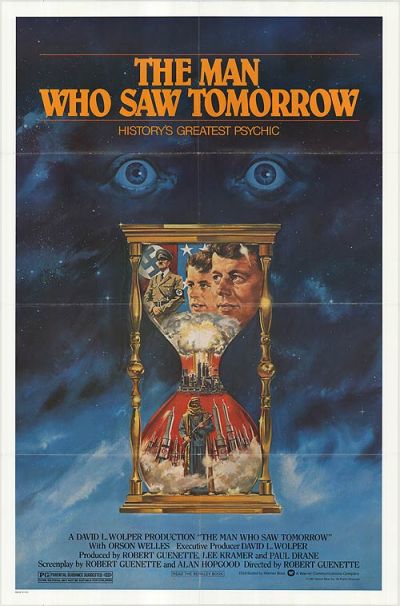 SERIAL: None. This time around the pre-movie offering was the 1953 short titled Nostradamus Says So.

HOST SEGMENTS: At one point Randy and Richard read aloud some ridiculously bizarre predictions made in tabloids by “psychics” of the time period.

THE MOVIE: The Man Who Saw Tomorrow was a hilariously melodramatic and irrational documentary playing along with the silly notion that the 16th Century “seer” Nostradamus’ vague and noncommital quatrains predicted major future events. Orson Welles, in his “anything for money” phase, narrated the film.

This movie was up there with the campy UFO and Bigfoot documentaries of the 1970s and 1980s. Welles, who has to hurriedly pluck his cigar from his mouth at one point so that he can be understood, seems on the verge of laughter most of the time. As usual in anything about Nostradamus meanings are forced into his centuries-old poems that make them seem like he was a “prophet” who foresaw the rise of Napoleon, World War Two, the John F Kennedy assassination and just about anything else that true-believers want to read into the man’s vague scribblings. END_OF_DOCUMENT_TOKEN_TO_BE_REPLACED

SERIAL: None. This week the movie, commercials and Host Segments filled the entire two and a half hour running time.

FILM VAULT LORE: Just Imagine is one of the movies referenced on The Texas 27 Film Vault 3-D poster from 1987.

HOST SEGMENTS: At this point I have unearthed no info about this episode’s Host Segments/ Comedy Sketches. Any other fans of The Texas 27 Film Vault can contact me with their memories via my FAQ page.

THE MOVIE: Just Imagine was one of those true oddities that The Texas 27 Film Vault’s format was perfect for. This uproariously campy sci-fi relic started with a comparison of life in America in 1880 and 1930, the year the movie was released. From there it provided a speculative tale about life 50 more years in the “future” of 1980. The lame special effects, failed predictions about the future, typically stiff acting for a 1930 effort and – worst of all – a few unbearable SONGS make this a true Bad Movie Classic deserving of a Plan 9– sized cult following.   END_OF_DOCUMENT_TOKEN_TO_BE_REPLACED

SERIAL:  Before showing and mocking the movie our members of the Film Vault Corps showed and mocked a chapter of Flash Gordon Conquers the Universe (1940). In that serial Ming the Merciless unleashes a disease called the Purple Death on Earth, prompting Flash Gordon, Dale Arden and Dr Zarkov to fly to the planet Mongo to find a cure and defeat Ming for good. 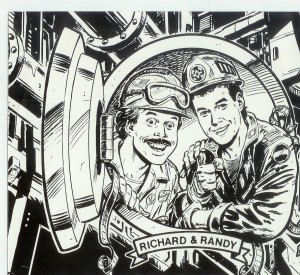 FILM VAULT LORE: Fellow Film Vault Fan Doctor X-Rae ( a lady, hence the spelling) informed me that this 1952 film was shown by our boys as part of a promotional give-away of tickets to the Chuck Norris movie Invasion USA which was hitting theaters back then. This would have been similar to the ticket give-away a month or so earlier to the 1985 Godzilla remake, for which Randy and Richard showed King Kong vs Godzilla.

HOST SEGMENTS: Some potential dispute here. Dr X-Rae thinks that this was the episode that showed Randy and Richard seeming to quit the Film Vault Corps (“the few, the proud, the sarcastic”) and through an oddball series of events, winding up in front of a firing squad … and getting shot! 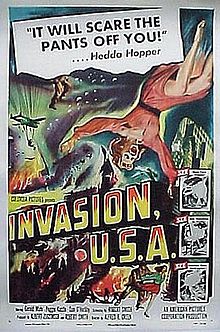 It all turns out to be a dream – see my interview with Randy Clower for details. This would all tie in with the “it’s only a dream” style ending of Invasion USA (1952 version) but there’s no hard and fast rule that the Host Segments HAD to parallel the night’s movie. Randy himself is unable to help as he doesn’t recall either way. (I think I’ve drained the poor man’s mind of every shred of Texas 27 Film Vault memories at this point.)

END OF THE WORLD MYTH: THE LATE GREAT PLANET EARTH (1970)

This time around Balladeer’s Blog will be examining the incredibly detailed end of the world scenario presented in Hal Lindsey’s 1970 book The Late Great Planet Earth. The book’s interpretation of Biblical “prophecies” in terms of contemporary geopolitical events was so thoroughly researched that it still provides good reading fun as pure escapist fiction. The book was a phenomenal hit and was later made into a documentary (snicker) narrated by Orson Welles in his “anything for money” phase.

Here is a brief outline of the way in which Lindsey’s book depicted the End Times:

1. The Antichrist, posing as a human politician, finally brings peace to the eternal problem child of the world, the Middle East. This accomplishment enhances his political END_OF_DOCUMENT_TOKEN_TO_BE_REPLACED

Filed under End of the World Myths