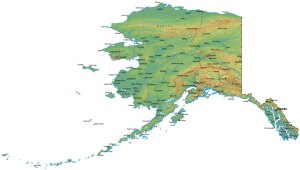 INUGPASUG – This god was a giant who could be said to fall under the mythological category of a “divine geographer”, like Khong Lo in Vietnamese myths and Halmang in Korean myths.

Such figures are revered as having sculpted and/or created many of the world’s geographical features. In the case of Inugpasug, the Shaktoolik Peninsula in Alaska, Egg Island, Besboro Island and many other landmarks in regions occupied by the Inuits.