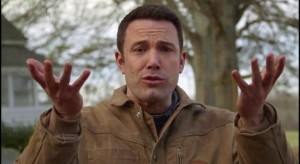 “I come from a long line of slave-owning scumbags.”

Ben Affleck, best known for being a cowardly apologist for and enabler of Muslim homophobia and misogyny, is at the center of a new controversy because of his heavy-handed attempts to get his family’s history of slave-owning censored from a PBS documentary. Meanwhile, another film has been released about Affleck’s slave-owning family.

In the new movie titled Roots 3: The Ben Affleck Story, Affleck was quoted as saying “I learn a few lines for movies and that makes me above you commoners. My role in life is giving finger-wagging lectures to the peons. I should be above the humiliation of being exposed as the scion of a repulsive family of slave-owners. That’s off the record, by the way.” END_OF_DOCUMENT_TOKEN_TO_BE_REPLACED