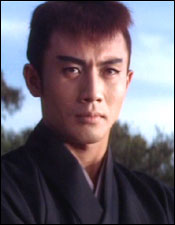 I figured Halloween Month was a good time to – at long last – resume my reviews of the Son of the Black Mass series of Samurai movies. This time around I will examine the fourth film with legendary Raizo Ichikawa. I will eventually cover the pre-Raizo and post-Raizo SOTBM flicks as well PLUS the original novels that the movies were based on. FOR MY BRIEF OVERVIEW CLICK HERE

SWORD OF SEDUCTION (1964) – We revisit our protagonist Kyoshiro Nemuri – a red-haired Samurai, the offspring of a Japanese woman and the insane Portugese Christian Missionary who raped her. That madman was dabbling in Satanism and Nemuri was conceived during a Black Mass, hence the title of the novels and the subsequent film series. 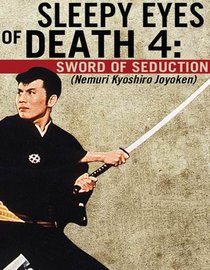 Once again the story is set in Japan in the 1780s. The persecution of Japanese Christians continues, with the religion officially outlawed and with practitioners being imprisoned and – if they refuse to renounce their belief system – executed by crucifixion.

I always jokingly refer to the opening of Sword of Seduction as “the Casablanca opening.” A fugitive Christian approached a boozing Nemuri Kyoshiro at a tavern and showed him a logo of a cross inside a secret compartment of a piece of jewelry like the Free French ring used in Casablanca. To further the similarities to the Bogart film this Christian soon gets dragged off Ugarte-style for his Christian beliefs and he flees back to Nemuri Kyoshiro in a vain plea for help from our melancholy antihero.  END_OF_DOCUMENT_TOKEN_TO_BE_REPLACED

Balladeer’s Blog continues its examination of the Son of the Black Mass series of Samurai films. This is the sixth film overall but just the third starring legendary Raizo Ichikawa. The films were based on Renzaburo Shibata’s novels about Nemuri Kyoshiro, a red-haired fallen Samurai whose odd hair coloring was the result of his mixed birth. A Portuguese Christian missionary dabbling in Satanism raped Nemuri’s mother during a Black Mass, hence his red hair, outcast status and supernatural abilities.

FULL CIRCLE KILLING (1964) – Beginning with the next film the Nemuri Kyoshiro series really hits the dark, offbeat and transgressive stride that it is most remembered for. Think of Full Circle Killing as a stylistic stepping stone, since it has a cynical Samurai Noir feel to it plus heavier blood & gore as well as further clues about the supernatural nature of our hero’s Full Moon Death Strike. We also get our first hint in the movies that Nemuri can sense the whispers of the dead whenever he passes by cemeteries, a concept more fully developed in the novels (which I will review separately).   END_OF_DOCUMENT_TOKEN_TO_BE_REPLACED