James Woods is like a force of nature. When he’s on the screen he virtually blows away most of the people with whom he shares that screen. His staggering versatility also marks him as one of the few true actors in the industry. Here are some of the movies which harnessed Hurricane Woods: 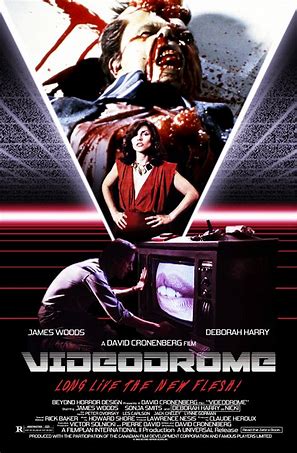 Comment: Sorry to start with such an obvious choice but I’m amazed that there are still people out there who haven’t seen this movie. David Cronenberg’s patented body horror and other surreal visuals needed a thespian who wouldn’t fade into the woodwork among them. Woods as the intense, sleazy Max Renn fit the bill perfectly.

James proved you don’t need to be twitchy and leering to portray a character who is virtually amoral in his pursuit of money, kinky thrills, Deborah Harry … and the ultimate underground broadcast called Videodrome. Anticipating the Deep Web, there was this magnificent film about how – before the internet came along – it was cable television that was considered a doorway to the forbidden and the depraved.

A cable titillation peddler tries to locate and strike a broadcast deal with a seeming Snuff Show called Videodrome. The sinister parties behind the pirate broadcast are the ultimate villains for the time period, and Cronenberg’s treatment of them shows that SUBTLETY can be more effective than hammering your audience over the head. LONG LIVE THE NEW FLESH!   END_OF_DOCUMENT_TOKEN_TO_BE_REPLACED