Halloween Month is racing toward its end so here’s another seasonal post. It’s a review of the first three volumes of Graveyard Shift, the “monsters as superheroes” series by Jon Malin, Mark Poulton and Aaron Alfeche. 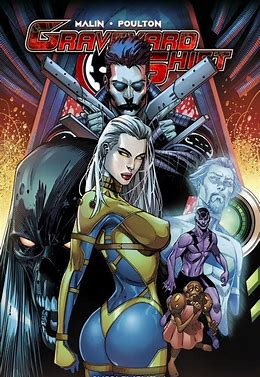 Professor Blood, the Monster, the Bride, Monster Girl, Sea Urchin and Ghost in the Machine. I’d call this team the greatest heroes alive … except they’re all dead. This initial Graveyard Shift installment was a critical and financial triumph, blending horror, science fiction, superheroics and OUTSTANDING artwork into one of the most acclaimed independent comics ever. (Yes, these sequential art visionaries left the creative suffocation at the Big Two publishers to pursue their own projects.)

Each volume is the length of almost 3 regular comic books. The unfolding story in Graveyard Shift also pays homage to many horror classics through the names of several characters and organizations.

Atlantis Corporation, a subaquatic base for scientific research run by a man named Abraham Van Helsing is pursuing many projects for its charming but nefarious founder. One of those projects is an enormous spaceship that is being readied to transport thousands of scientists and colonists into space to explore distant planets.

Another undertaking (as it were) is Project Wormwood, which involves Regen Chambers to restore life to newly slain soldiers in order to form an unbeatable army, and Mind Wipe technology to reprogram the revived dead to know nothing but their new existence as servitors of whatever nation buys them (but really as servitors of Van Helsing himself). END_OF_DOCUMENT_TOKEN_TO_BE_REPLACED 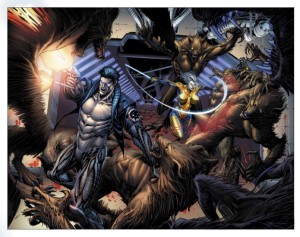 You loved the first GRAVEYARD SHIFT story … You shrieked with rapturous delight over GRAVEYARD SHIFT VOLUME TWO … Now prepare yourselves for the THIRD Volume of Jon Malin and Mark Poulton’s “monsters as superheroes” team.

Jon Malin, one of the iconoclastic comic book outlaws pursuing his creative vision free from the toxic corporate influence of the Big Two publishers, teams up once again with Mark “Hawkman” Poulton and new teammate Aaron Alfeche.

This third adventure for Graveyard Shift will feature more of the horrors and spectacle of the previous epics as the team tries to save the entire world from a werewolf infestation. This job is so big that the team must join forces with three NEW heroic supernatural creatures.

*** UPDATE: For my review of ALL THREE volumes of Graveyard Shift click HERE. END_OF_DOCUMENT_TOKEN_TO_BE_REPLACED 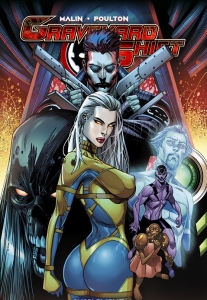 Halloween month continues here at Balladeer’s Blog with a look at the first two volumes of Graveyard Shift, the “monsters as superheroes” sensation drawn by THE Jon Malin and written by Mark Poulton.

The introductory Graveyard Shift graphic novel presented the team’s “senses-shattering origin.” To quote the creators: “Scientists Vladimir Blud, Lillith Mayhew and her husband, head of security Mick Mayhew are working on advance human regeneration for the mysterious ATLANTIS CORPORATION. Betrayed, murdered and put into their own experiments they are reborn with super human abilities, they are the GRAVEYARD SHIFT and they are all that can stop a rising supernatural evil from taking over the world!” 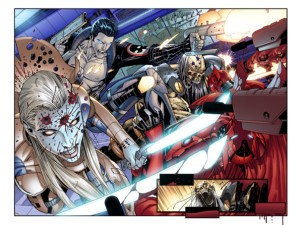 Graveyard Shift Volume Two featured the team taking on the reborn menace of Dracula himself and his legions. The first two installments raised six figures each on Indiegogo and it is presumed that the third volume, expected in 2020, will continue that trend.

Malin is one of the comic book “Outlaws” going their own way to pursue their vision free of the corporate influence of the Big Two publishers. He has also worked with fellow Outlaw Richard Meyer on his indy superhero team called Jawbreakers. END_OF_DOCUMENT_TOKEN_TO_BE_REPLACED