Another post for this superhero-crazed world. It’s a look at another forgotten pantheon of heroes. 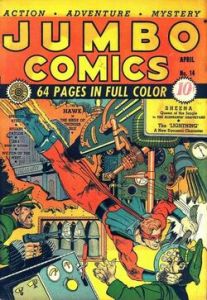 Origin: Jeff Larkin, the son of an American Army General, secretly invented a belt which, when activated, gave its wearer super powers. He donned a costume and fought the forces of evil as the superhero called Lightning.

Powers: Lightning’s power belt enabled him to fly and to shoot lightning bolts from his hands. It also granted him a degree of super-strength.

Comment: When the U.S. entered World War Two Fred Larkin enlisted in a unit under his father’s command, but kept his identity as Lightning a secret.

Secret Identity: Never revealed but created by Jock Lawrence, which would have been a great name for him.

Origin: Prior to becoming Commando Ranger in 1943 this man had been an Olympic boxer, had climbed Mount Everest, had helped against the plague in the Congo and had served as a fighter pilot in another nation’s armed forces before the U.S. entered World War Two.

He then spent two years studying under the Lamas in Tibet, mastering their disciplines. Returning to the war, he was assigned to serve as a masked and costumed operative against the Nazis on mainland Europe. This assignment was given to him by Franklin Roosevelt and Winston Churchill.

Powers: Commando Ranger had perfect bodily control, could endure incredible levels of pain and was honed to the peak of physical condition. He had mastered all methods of unarmed combat and was an expert with guns, explosives and especially his winged knife.