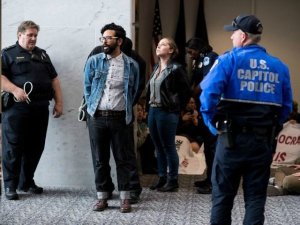 Wow! This is a very positive development! Protesters occupied the Capitol Hill office of the Democrat Senator Chuck Schumer TO CONTINUE BERNIE SANDERS’ FIGHT TO EXPOSE THE WAY WALL STREET AND INTERNATIONAL BANKSTERS OWN THE DEMOCRATS (DemCorp) as surely as they’ve long owned the Republicans (RepubCorp).

In the past a large obstacle to effectively addressing the problem of big money in American politics was the fact that – especially overseas – too many people lived in the past and hadn’t noticed that the Democrats were just as much in bed with one percenters as the Republicans were.

Hopefully this momentum will carry over and we can finally battle the entirety of the problem without being hindered by the silly notion that the Democrats are somehow “the good guys” to the Republicans’ “bad guys.” Both parties are the problem. The black and white working class has suffered long enough from the actions of our bought and paid for political class.    END_OF_DOCUMENT_TOKEN_TO_BE_REPLACED