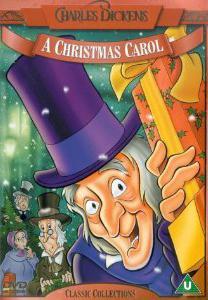 A CHRISTMAS CAROL (1982) – Burbank Films of Australia produced this mediocre at best animated version of the Dickens classic. Previously I reviewed the 1969 Australian cartoon version and if you were to go strictly by this 1982 rendition of A Christmas Carol you would think that Australian animation technology had not progressed one bit since 1969.

Background figures often don’t move at all and the ones that do just repeat the same gestures and gesticulations ad nauseum like in early video games. There’s also a delayed reaction element to every dialogue exchange early on. The Australian accents add a bit of novelty but that was also true of the 1969 version.

Moving on to the story, Nephew Fred’s visit to his Uncle Ebenezer and Bob Cratchit largely sticks to dialogue directly taken from the novel but pointlessly throws in meaningless asides here and there. The delayed reactions in the early exchanges of dialogue really stick out here. It’s like you’re watching live actors who take a while to remember their next line.

The dialogue flows much better between Scrooge and the two Charity Collectors. Bob Cratchit’s farewell to his boss is trimmed to the bone, robbing it of any impact, but this IS one of those versions which shows Bob joining children in sliding along the sidewalk ice like an overgrown kid so that’s nice.   END_OF_DOCUMENT_TOKEN_TO_BE_REPLACED 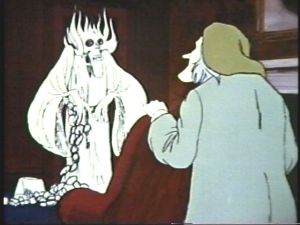 I have several dozen video versions of the Charles Dickens classic and for years now I have filled the time between Thanksgiving and Christmas watching umpteen different adaptations of this epic myth of the Industrial Age.

A CHRISTMAS CAROL (1969) – Air Programs International produced this fun animated version from Australia. There are books out there whose reviewers trash this version of A Christmas Carol but their reviews are so loaded with factual errors about this cartoon that I END_OF_DOCUMENT_TOKEN_TO_BE_REPLACED