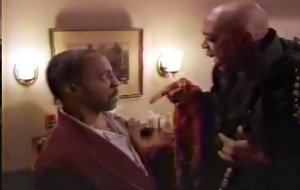 JOHN GRIN’S CHRISTMAS (1986) – The 2022 edition of Balladeer’s Blog’s Annual Christmas Carol-A-Thon continues with this obscure item from the 1980s. My copy of John Grin’s Christmas was already barely watchable when I first tracked it down and it looks worse and worse each time I watch it. Still no DVD release, though, so I’ve decided to give up hoping for a clearer copy and will just review it as is.

Renaissance Man Robert Guillaume directed and stars as the Ebenezer Scrooge stand-in John Grin, our title craftsman who makes a variety of collectibles. Many sources claim he only makes toys but that is not true, it’s just that as Christmas approaches most of his sales are toys. And, since the story is set around Christmas time …

At any rate Guillaume owns the rights to John Grin’s Christmas and has yet to release it on DVD or Blu-Ray.

Alfonso Ribeiro took time out from Breakin’ and Poppin‘ to costar as Rocky/ Tim Williams, an odd composite of A Christmas Carol’s job-hunting Peter Cratchit, Scrooge’s nephew Fred and Tiny Tim. There is a fairly major twist involving Ribeiro’s character but I won’t spoil it here.

Guillaume’s son Kevin plays the Bob Cratchit stand-in named Sam Oliver and – like his father he has an impressive singing voice which he shows off in this telefilm. But we all know that the Ghosts are where the action is so let’s go.

This being a mere hour-long production including commercials the story gets stream-lined, with no time for a Marley’s Ghost substitute. We go straight to the Ghost of Christmas Past, played by Roscoe Lee Browne, who replaced Guillaume as the regulation Mouthy Servant In A Susan Harris Joint on the soap-opera parody Soap. Guillaume’s butler figure Benson went on to his own spinoff show, so Browne took his place as Saunders.

Anyway, you can decide for yourself if it’s a promotion or a demotion to go from playing the new butler for Jessica Gatling Tate to showing John Grin how sad his past Christmases were. Kidding aside, our Scrooge substitute lost his family in a fire on Christmas, following which he devoted himself to making money instead of love or artistic pursuits.

The Ghost of Christmas Present is played by Ted Lange, of Love Boat and Friday Foster fame. His performance sort of reminds me of his pimp character from the latter, adding a certain blaxploitation feel to his segment. That’s not a compliment OR an insult, just an observation since it’s a bit jarring after Roscoe Lee Browne’s typical air of dignity laced with menace as the previous Spirit.

For the Ghost of Christmas Future/ Yet to Come we get Geoffrey Holder, the Cola Nut man for trivia buffs. Holder is better known as Baron Samedi in Live and Let Die and as the knife-thrower in Swashbuckler. He’s as one-note as ever in John Grin’s Christmas, but hey, for as broad a role as a Christmas Ghost – even if he talks Grin’s ear off at times – he’s a perfect fit.

Guillaume’s performance is excellent and I will always consider him one of the most underappreciated actors from the 70s and 80s. With John Grin’s Christmas he showed he is no slouch as a director and producer as well. This is a very moving and heart-warming version of A Christmas Carol. ++