THE INSPECTOR (1965) FOR THE SHORTEST DAY OF THE YEAR 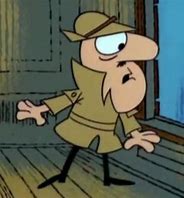 Because December 21st is the shortest day of the year, Balladeer’s Blog always runs articles about short films, short presidential administrations, etc. This year I’m observing the 57th anniversary of the theatrical release of the very first animated short in The Inspector series on December 21st, 1965.

The Inspector was the DePattie-Freleng cartoon character introduced in the animated opening credits of the Blake Edwards/ Peter Sellers Pink Panther movies. This inept yet overconfident detective was based on Sellers’ memorable Inspector Clouseau character in those comedies.

The Pink Panther had already graduated from being the opening credits mascot of Edwards’ series to its own series of cartoon shorts. When the tradition of screening original cartoons before the latest movie releases ended (for the most part) in the late 60s/ early 70s, many of those animated shorts were packaged as cartoon shows for Saturday morning television. The Inspector found a new home as part of the Pink Panther cartoon show.

All of those programs played in reruns for decades, often recycling the same few dozen (or less) cartoons over and over again. The Inspector series of 34 animated shorts had run in movie theaters from December 21st, 1965 to May 14th, 1969.

THE GREAT DE GAULLE STONE OPERATION – Yes, it was 57 years ago on this date when this Inspector cartoon debuted. As of 1965 the Blake Edwards/ Peter Sellers film series consisted of just The Pink Panther (1963) and A Shot in the Dark (1964). (The original Pink Panther movie premiered in Europe in December 1963 and America in 1964, which is why it is sometimes listed as a 1964 release instead of 1963.)

There would be no more live action movies featuring Clouseau for four years, when Alan Arkin replaced Peter Sellers for Inspector Clouseau in 1968. Until Sellers returned to the role in Return of the Pink Panther in 1975, the cartoon version of the Inspector was the only version of the character showing up at cinemas. 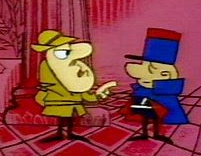 Pat Harrington, perhaps best remembered as Dwayne F. Schneider on One Day at a Time, provided the voice of both the Inspector AND his sidekick, Sergeant Deux-Deux. Larry Storch aka Corporal Agarn on F-Troop, voiced the Commissioner, the impatient superior of the hapless Inspector. (Later, Paul Frees would take over the voice role.)

The Great De Gaulle Stone Operation featured the Inspector and Dieux-Dieux trying to recover the Great De Gaulle Diamond from the surrealistic three-headed jewel thief called the Brothers Matzoriley. Each of the thief’s heads is a character representing the three Great Powers of the time, the United States, the Soviet Union and Communist China.

Even this thief character came from opening credits in the Blake Edwards/ Peter Sellers films, in this case A Shot in the Dark. A total of 34 animated shorts were made in The Inspector series for theatrical release. Decades later, new creative teams began adding to the series with cartoons created specifically for television.

At any rate, one of the movies that The Great De Gaulle Stone Operation went on to open for was the James Bond film Thunderball, starring Sean Connery. 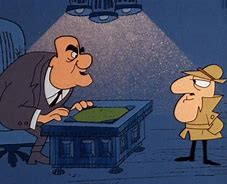 THE ONE-ISSUE ONLY COMIC BOOK IRON MAN AND THE SUB-MARINER.

WILLIAM HENRY HARRISON, WHO WAS PRESIDENT FOR JUST 32 DAYS BEFORE DYING.

THE SUPERHEROES OF PELICAN PUBLISHING, WHOSE ENTIRE PUBLISHING RUN WAS JUST ONE ISSUE.

THE SUPERHEROES OF THE VERY BRIEF RUN OF ATLAS/ SEAVIEW COMICS IN 1975.