With the 4th of July Holiday rapidly approaching, Balladeer’s Blog takes a look at one of the patriotic superheroes of the World War Two Era – in this case Minute-Man, whose nom de guerre came from the famed Revolutionary War militiamen.

Origin: Private Jack Weston at Camp Blaine was selected by General Milton to secretly become America’s costumed operative Minute-Man, sent on missions of vital national security on a minute’s notice like the Minutemen called to action in the Revolutionary War.

Powers: Minute-Man was in peak physical condition and possessed the agility of an acrobat. He was a master of unarmed combat in addition to being well-versed in commando techniques.

Comment: Jack Weston was later promoted to Lieutenant in order to give his secret identity more flexibility, but General Milton remained the only one privy to Minute-Man’s real name. Jack’s father Robert was killed in action during World War One. 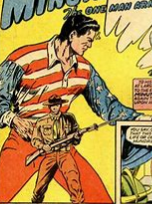 STORY 1: The Origin of Minute-Man

Synopsis: General Milton gives Private Jack Weston his secret assignment to be the costumed operative called Minute-Man. The hero thwarts a ring of masked spies from an unknown country (but clearly Germany) who want to discourage America from entering World War Two.

Minute-Man saves a train-load of new soldiers from plunging over a cliff, then stops the foreign spies from blowing up an entire U.S. Army training base.

Synopsis: General Milton sends Minute-Man to the Top Secret Army Air Base at Analosta to stop the sabotage of new fighter planes under development. Using his rocket-powered winged backpack, the hero saves one of the experimental planes from destruction and takes down the sabotage ring run by beautiful female spy Illyria, who will become Minute-Man’s archenemy.

Illyria escapes, but her men are killed or captured.

Synopsis: Illyria strikes again, this time leading a ring of German, Japanese, Italian and French Vichy operatives. They covertly take over war games being run by General Milton and start killing the men for real, but Minute-Man thwarts Illyria’s plans and frees the general from her clutches.

Our hero nearly captures Illyria but one of her underlings gives his life to let her escape.

Synopsis: Illyria and her spies try to convince the inventor of a deadly new explosive to sell the secret to the Axis Nations but he refuses, so they abduct him. Minute-Man succeeds in freeing the scientist and in capturing all of the spies – including Illyria this time.

STORY 5: Two Lives to Give for His Country

Synopsis: Minute-Man disrupts an espionage network run by Nuggerud the Agitator and also stops the network’s plan to initiate hostilities between America and the neutral nation called Rinaldo through explosives planted at their embassy.

Synopsis: Illyria escapes from prison on the 4th of July and plans to use tainted fireworks to blow up revelers at an Independence Day celebration. Minute-Man disrupts her plans and saves countless lives, but when he can’t bring himself to shoot a woman, Illyria manages to escape.

Synopsis: Hitler himself sends Kapitan Von Gurn and a team of commandos to America to abduct General Milton and bring him to Germany. Once there he will be tortured for all the military secrets he knows, then killed.

Minute-Man defeats Von Gurn’s entire team, frees General Milton from the Kapitan’s submarine and even sends a taunting message to Hitler in Berlin.

STORY 9: From the Dust of Defeat

Synopsis: General Milton sends Minute-Man to rendezvous with an American agent who has stolen Axis plans for a super-weapon. Illyria and her men beat him to the location, kill the agent and steal the plans.

Our hero traces the spy queen to her booby-trap laden hideaway where he outfights and captures her men while also recovering the stolen plans.

Synopsis: Illyria and her latest gang of operatives steal the U.S. Army’s latest high-tech bomber and, from her secret base near the Rockies, launch a reign of terror on the country by using the stolen bomber. Minute-Man locates the secret base, frees Illyria’s captured slave laborers and defeats her spy ring.

Our hero also captures Illyria when she tries to flee in the stolen bomber.

Synopsis: Minute-Man wages an all-out war with Japan’s secret Black Dragon Society as they launch terrorist attacks all across America. Our hero thwarts all their plans up to and including their attempt to assassinate President Franklin Delano Roosevelt.

Synopsis: Minute-Man tangles with a supervillain called the Hawk, whose costume allows him to fly and also features sharp taloned gloves. The Hawk runs a spy ring of phony cripples and beggars who kill U.S. soldiers and also steal military secrets.

Synopsis: When the massively muscled Killer Mills is hanged for murder, he seems to have returned from the grave and begins killing the judge and jury that he blames for his death sentence. Minute-Man investigates and ultimately defeats the huge murderer, revealing it to be Killer Mills’ twin brother posing as his late sibling. 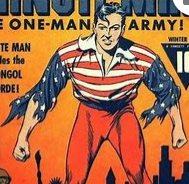 Synopsis: Minute-Man must solve the mysterious attacks of a glowing figure claiming to be the returned Sir Francis Drake, fulfilling a curse laid on a shipment of gold passed down in his will. Our hero proves that two museum authorities were using an electrical sword and other weaponry to pose as Drake.

Synopsis: Minute-Man fights a trio of American traitors who try to rob Camp Blaine’s payroll, impersonate General Milton and destroy the Army’s experimental new tanks which can function on land and underwater.

Synopsis: A new costumed supervillain called Dr. Hour is killing off the family and staff of a major American munitions manufacturer named Thor Pedo. (I’m not joking. That is the bizarre name they went with.) Dr. Hour is doing it by way of rigged grandfather clocks when they ring thirteen times and by throwing his miniature hourglasses which are gas bombs that unleash poisoned sands.

Minute-Man stops the villain’s murder spree and exposes his plans to cash in on the stock market.

Synopsis: We get another colorful addition to Minute-Man’s Rogues Gallery of foes in the form of the Toymaker, who uses deadly modified toys to kill and destroy. Using things like toy soldiers and poison-tipped Jack in the Box weapons the villain tries to assassinate the visiting boy king of a fictional Eastern European country which stands against the Nazis.

Minute-Man manages to keep the king alive despite a few collateral deaths and captures the Toymaker.

Synopsis: Minute-Man takes action when Adolf Hitler sends a hideously ugly Nazi Assassin to kill off people involved in the production and sale of America’s War Bonds to help fund the war effort. Things get personal when one of the Assassin’s targets is General Milton’s daughter, who becomes Minute-Man’s romantic interest from this point on.

The Assassin uses a variety of knives and guns plus he drives a sort of “Assassin-Mobile” which is outfitted with assorted James Bond gimmicks.

STORY 19: The Fumes of Fear

Synopsis: A goggled Japanese supervillain called Doctor Fear has been secretly experimenting on human guinea pigs in a west coast hospital near Camp Blaine. His inhumane experiments have let him perfect his Fumes of Fear, which can induce enough terror in American soldiers to make them commit suicide and/or make them hallucinate their greatest fears.

The villain unleashes the fumes via his fake lapel flower, his cigarette smoke and through hand-held test tubes. Minute-Man corrals Dr. Fear, his ring of Japanese agents and recovers top secret war plans that were stolen by the villain.

Note: Dr. Fear and his men practice the Shinto faith. 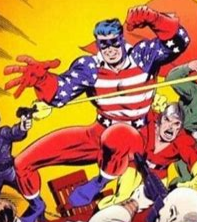 THE FIRST TWENTY CAPTAIN AMERICA STORIES FROM THE 1940s.

THE FIRST TWENTY UNCLE SAM STORIES FROM THE 1940s.

THE FIRST TWENTY SHIELD STORIES FROM THE 1940s.

THE FIRST 16 FIGHTING YANK STORIES FROM THE 1940s.

7 responses to “MINUTE-MAN: THE EARLY STORIES”