Christmas Carol-A-Thon 2021 rolls along here at Balladeer’s Blog with this look at a very good comedic rendition of the Dickens classic. 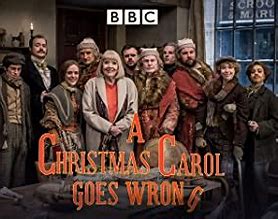 A CHRISTMAS CAROL GOES WRONG (2017) – The players from Great Britain’s Mischief Theater Company strike again in their guise as the Cornley Polytechnic Amateur Dramatic Society. After the absolute disaster they made of their 2016 production of Peter Pan (see Peter Pan Goes Wrong), the Society were banned from the BBC.

Undeterred, the troupe take over a live broadcast of A Christmas Carol starring Derek Jacobi. They do this via an all-out commando raid hilariously carried out through action movie cliches like the kind of wire work Tom Cruise has done in multiple Mission Impossible films. 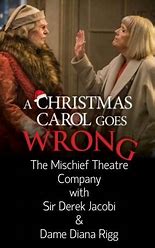 From there the Society mount their own production with their highly flawed but immensely likable players, highlighted by Chris (Henry Shields), Annie (Nancy Zamit), Robert (Henry Lewis) and others. Naturally, a LOT goes wrong.

The iconic Diana Rigg, like Jacobi, plays herself as the narrator and is the fictional aunt of Society player Sandra, who is portrayed by actress Charlie Russell.

The pirate broadcast goes on, with Chris (complete with fake nose) starring as Ebenezer Scrooge, much to Robert’s envy and outrage. Annie portrays Scrooge’s niece Frances as a replacement for Nephew Fred.  Dennis (Jonathan Sayer) plays Bob Cratchit, but is so nervous he can’t remember his lines, necessitating increasingly comical measures to just read those lines off any flat surface on which he can write them.

And so the live performance continues, with every Society member except Chris as Scrooge playing multiple roles. The comedy, both situational and slapstick, is very, very good.

In fact it is so good I want to avoid spoiling any of the jokes, many of which are multi-layered and take on new meaning as the production continues. Trust me, even if one of the early comedy bits strikes you as a little too obvious or broad, just wait until you see how the players revisit it later in the show, when the attention to detail and careful planning build on it ingeniously.

Avoiding spoilers does leave me in a bind regarding most of the laughs, but A Christmas Carol Goes Wrong also features meta bits that provide a little heart. Sandra seems about to dump her romantic partner Max (Dave Hearn) as soon as the broadcast is over, and Chris has plans to leave behind “these freaks” – as he calls his fellow Society members – and take a commercial acting gig.

The resolutions to those complications are cute and a little touching but fit into the overall production smoothly and are wrapped up before you can grow bored with them. And this show’s use of Ding Dong Merrily On High was nice, considering how many other Carol versions fall back on God Rest Ye Merry Gentlemen.

If you’ve seen ALL the “Goes Wrong” productions their brand of humor may be wearing thin for you at this point, sort of like some people wearied of The Naked Gun films after awhile, but if this is your first exposure to the Mischief Theater Company it’s a great way to discover them.

As Chris/ Scrooge, Henry Shields is terrific and has a certain Matt Smith appeal, making me wonder if this comedy troupe ever plans to do a Doctor Who Goes Wrong special. Although the disaster that Chris Chibnall has made of Doctor Who might be impossible to top. 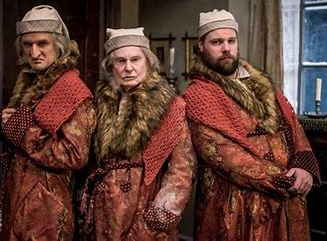 For Derek Jacobi fans, rest assured he pops up multiple times throughout the 49 minute runtime despite what seems like an early exit for him. As the narrator, Diana Rigg naturally makes several appearances as well.

At any rate, this little honey is a lot of laughs AND, appropriately enough for Christmastime, the humor will appeal to both adults and children, so everyone can watch it together. +++

Filed under A CHRISTMAS CAROL, humor