Halloween Month continues here at Balladeer’s Blog with this nostalgic look at the Big Five monster-themed cereals from General Mills.

In a world that has seen an Emoji movie I have no idea why there’s no animated monster rally movie featuring this quintet. Or at the very least maybe some new monster cereals like Vanilla Witch or Grape Goblin or something.

Voiced like Bela Lugosi, this cartoon vampire preferred his own chocolate-flavored, marshmallow-sprinkled cereal treat over sucking the blood of his victims. “I vunt to eat your cereal!” was, in fact, his tagline in contrast to the cliched vampire declaration “I vunt to suck your blood!”

The cartoon character’s imitation Bela Lugosi voice was a nice nostalgic nod to fans of classic horror films, especially in regard to the Count’s rivalry with another General Mills Monster Cereal Mascot.

Voiced like Boris Karloff, this spoof of Frankenstein’s Monster was addicted to his eponymous strawberry-flavored, marshmallow-sprinkled cereal. To stay kid-friendly, this cartoon monster’s form was more robot-like and mechanical rather than corpse-centric.

Frankenberry cereal is still in stores seasonally – September and October.

The cartoon character’s rivalry with Count Chocula and imitation Boris Karloff voice were nice nostalgic nods to fans of classic horror films, given the rivalry not only between Dracula and Frankenstein but between Lugosi and Karloff, too. Okay, they never matched the sexual tension between Quisp and Cap’n Quake, but what could? 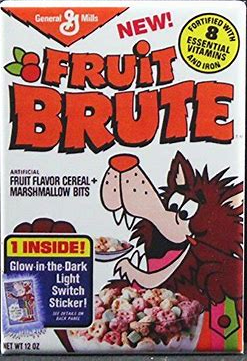 Fruit Brute was a cartoon werewolf who howled a lot but had a standard voice actor. No attempt was made to imitate Lon Chaney, Jr who had portrayed the Wolf Man in Universal Studios monster movies. Fruit Brute often howled about his lime-flavored, marshmallow-sprinkled cereal and employed a tag-line like Count Chocula had: “The howling good taste of fruit!”

Fruit Brute cereal lasted only until 1982. The brand was relaunched in 2013 with cherry flavoring instead of lime, but was discontinued again in 2014.

Apparent overconfidence at General Mills forced this launch of yet another Monster Cereal maybe sooner than they should have.

Yummy Mummy was a cartoon mummy with colored bandages who stayed alive on his orange-cream flavored cereal sprinkled with vanilla-flavored “monster-mallows”. He was discovered by Count Chocula, Frankenberry and Boo Berry when they explored his pyramid. His tagline was “Yummy Mummy makes your tummy go yummy!”

Yummy Mummy cereal lasted only until 1992. Like Fruit Brute it was relaunched in 2013 but discontinued again in 2014.

Yummy Mummy was voiced in imitation of Wolfman Jack, which is what should have been done with Fruit Brute since he was a werewolf. And Yummy Mummy’s many-colored bandages made it seem like his cereal would be multi-flavored but that was as misleading as Toucan Sam’s beak. The vanilla flavored monster-mallows were a nice touch, though, and were thenceforth used in Count Chocula, Frankenberry and Boo Berry cereals.

To this day, boxes of these cereals are used in a lot of households as seasonal decorations. For the discontinued Fruit Brute and Yummy Mummy the original cereals were drained from the boxes and replaced with sand to make them decorative. That sand probably matched the nutritional content of the cereals themselves, despite the 1970s claims that they were “vitamin-charged.”

There is a thriving market for merchandise regarding all five monster mascots, including Funko-Pops. For a nice sampling of the cereals’ television commercials from 1971 into the 2000s see below. You can subscribe to that channel HERE.

12 responses to “MONSTER CEREALS FOR HALLOWEEN”