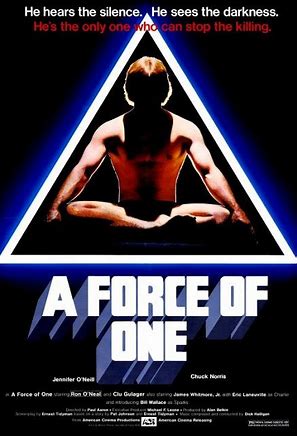 A FORCE OF ONE (1979) – Fresh off the success of Good Guys Wear Black, Chuck Norris starred in this action film directed by Paul Aaron in only his second directing effort. The prolific Ernest Tidyman wrote the screenplay.

The Story: In a fictional mid-sized California city, a drug operation is thriving, helped along by bad cops who funnel confiscated drugs right back to the head of the narcotics pushers after pretending to have destroyed the seized goodies per department policy. The drug ring uses a sporting goods store as their front and use an aspiring karate champ as their chief enforcer.

That enforcer is a deadly human weapon and when cops keep turning up dead at his hands the department hires a local karate dojo master to teach the police better techniques of self-defense. That dojo master falls in love with a lady cop and winds up helping the police to battle the drug ring.

CHUCK NORRIS is in the role of Matt Logan, a former special forces man from the United States Army. He’s the defending Middleweight Karate Champion and also runs a karate dojo on the side. One of his students is his black adopted son Charlie (Eric Laneuville), whose late mother he had platonically befriended when … oh, don’t worry about it. They might as well have saved time by just having him be one of Matt’s students, PERIOD, since his only purpose is to get killed by the drug dealers, thus giving Logan a personal stake in the crusade to bring them down.

Chuck is, as always, highly watchable in the action scenes but in this flick the inexperienced director apparently couldn’t overcome the way Norris drags down most of the other players to his own bland and awkward acting level. If “acting” isn’t too strong a word for what Chuck does in this flick. By the way, the Chuckster’s real-life dojo is used in A Force Of One, so viewers get to see where Norris trained the Karate Hookers for Dolemite II: The Human Tornado.

JENNIFER O’NEILL portrays Mandy Rust, a lady cop who talks the reluctant Matt Logan into teaching her and her colleagues advanced self-defense techniques against the apparently skilled martial artist employed by the drug ring ravaging the city.

O’Neill sports a VERY unbecoming short, choppy hair style in this film, and spends the entire running time making hilariously awkward faces for no apparent reason. She acts so jumpy and weaselly that, combined with the way she always wears long sleeves during the movie, it made me think she was acting nervous on purpose to set up a reveal that she was a dirty cop with a habit and track marks on her arms. Nope. She just seems braced for a bamboo stick across the back at any moment for no reason. It’s weird and distracting.

CLU GULAGER plays Dunne, the officer in charge of O’Neill and her narcotics unit. It will surprise absolutely no one to hear that Clu slouches and mumbles his way through the film while every now and then looking nauseous enough to throw up.

The good news is that this time around Clu adds a new dimension to his “nonchalance and nausea” schtick – he displays very weird mannerisms to the point that, at an early meeting with his subordinates, he seems like he’s about to break out in a song and dance number. Also, in a few scenes it looks like Clu has the same goofy hairdo as Jennifer O’Neill, which was good for some laughs.

RON O’NEAL, Youngblood Priest himself, portrays Rollins, a police colleague of O’Neill’s. He gives the best performance in the movie, even managing to stay convincing in scenes with Chuck Norris.

CLINT RITCHIE has the role of Melrose, the drug kingpin who uses a sporting goods store as a front and has a dirty cop on his payroll.

BILL “Superfoot” WALLACE was introduced in this film as Sparks, who is Logan’s upcoming opponent in the match to keep his crown, and is also the secret Walking Weapon who keeps killing cops with his bare hands. He also killed Matt’s adopted son Charlie when Charlie learned too much.

JAMES WHITMORE, JR is Moskowitz, a fellow cop of O’Neill and O’Neal. Whitmore should be very grateful that Ernest Tidyman didn’t write his Jewish cop character the same cosmically stereotypical way he wrote the Jews in his novel Shaft Among The Jews.

SPOILERS: Detective Rust deduces that Rollins is the bad cop and she’s right. She nabs Melrose while Chuck/ Matt gets the honor of finishing off Sparks in the climactic battle, but only after he subdues Rollins in the most hilariously ANTI-climactic way imaginable.

It’s impossible not to laugh at the half-assed policing and investigative techniques displayed by the cops in A Force Of One. Clu Gulager never knows what his detectives are doing or where they’re doing it, so that after they each get killed in turn by Sparks nobody knows what lead they were running down.

And that’s just the tip of the iceberg. It’s entirely possible that we modern viewers are so deluged with police procedural shows which present a more realistic depiction of investigations that we can’t help but laugh and pick apart cops in old movies like this. Viewers in 1979 may not have noticed or cared how inept Clu and company are.

And that’s fair enough, because the main draws for A Force Of One are Chuck Norris and his stylish takedowns of the bad guys. There’s no disliking the affable Norris, so his movies are pretty much review-proof. I watch his movies multiple times myself, no matter how much this review may make it seem like I don’t like them. +++

FOR MY LOOK AT TWENTY JAMES GARNER MOVIES CLICK HERE.

FOR THE FIRST TWELVE ADVENTURES OF SHANG-CHI, MASTER OF KUNG FU CLICK HERE.

FOR THE EARLY ADVENTURES OF IRON FIST CLICK HERE.