THE FRENCH FOREIGN LEGION IN THE SECOND MADAGASCAR CONFLICT

Previously Balladeer’s Blog has examined Garrison Tales From Tonquin (Tonkin), the 1895 collection of short stories by James O’Neill, an American who served in the French Foreign Legion in Algeria and Vietnam during the 1880s and 1890s. I’ve also covered the Legion at Camerone and during the Great Syrian Revolt of the 1920s.

SECOND MADAGASCAR AFFAIR – This time around I’ll take a look at the French Foreign Legion during the 2nd Madagascar Conflict/ Expedition. The fighting went on from December 11th of 1894 to September 30th of 1895. This entire affair was so mishandled by French politicians in Reunion, by the War Minister and by General Jacques Duchesne that they basically killed thousands more of their own troops than were killed by the opposing forces.

TAKING IT FROM THE TOP – Typically for my French Foreign Legion posts, I’m not on their side in the war that the French government sent them to fight. It was the usual colonial nonsense, in this case exploiting unrest in the targeted country to use as an excuse for intervening and making Madagascar a French Protectorate. Regular readers know I don’t write sentiments like that to please politically correct fools, it’s just how I sincerely feel. If I felt any other way I wouldn’t hesitate to say so.

DECEMBER 1894 – On December 11th France declared war on Madagascar after its rulers refused to willingly become a French Protectorate. Though the French Army would be running this military campaign, the French Navy and their Marines kicked off the action by bombarding and then seizing Toamasina/ Tamatave on the eastern coast of Madagascar.

Though that location would have been ideal for a fairly quick march on the capital city of Tananarive/ Antananarivo, the French Army had beat out the French Navy for control of this war by UNDERCUTTING THEIR BID. (!) To stay within the lower costs the War Ministry had allocated, the army’s General Duchesne instead insisted on starting their campaign at Majunga/ Mahajanga on the northwestern coast of Madagascar, nearly doubling the amount of territory to be fought through.

JANUARY 1895 – In a relative feeling of “Team Spirit” the French Navy cooperated by now taking the area designated by the army for their landing site. On January 15th Majunga/ Mahajanga was bombarded and seized, fortress and all. Soon, however, the cosmic unsuitability of this location became apparent.

Coral reefs prevented the approach of large ships. Plus the Bay of Majunga/ Mahajanga had swells that would have swamped the smaller vessels. All of this meant that the original plan to use rivercraft where the bay met the mouth of the Betsiboka River had to be abandoned. A long, circuitous land route was instead established with porters and Lefebvre Wagons carrying supplies and equipment inland.

Since the Lefebvre Wagons needed smooth roads on which to travel, the French Foreign Legion and the other military units who had already landed had to construct the roads themselves.

FEBRUARY through APRIL 1895 – Duchesne’s army was reduced to a very slow – as in MONTHS LONG – disembarkation at Majunga/ Mahajanga. While the general and the War Ministry scrambled to round up the additional men and materiel needed for the new campaign plan, the French troops building up at the site had to just endure the untold numbers of mosquitoes.

Quinine had been brought along to help combat malaria, but poor planning had seen the medicine loaded onto the transport ships FIRST, which meant that the quinine would have to be unloaded LAST after everything else that was piled in front of it was unloaded.

The building of the roads had continued from mid-January through the present, with the tropical conditions in the area killing off hundreds of men from the strain of the construction. Between those losses and the deaths from malaria, a forest of crucifixes over the graves of the buried stretched further and further across the landscape. The only consolation was that this time the entire army was suffering the horrendous conditions that were often just the Legion’s cross to bear.

MAY 1895 – On May 2nd Duchesne’s forces were at last on the move and won a battle over the Malagasy Army at Marovoay, near where the Betsiboka River empties into the Bay of Majunga/ Mahajanga. The French were outnumbered and the men of Madagascar were behind strong fortifications, but the battle became a rout. 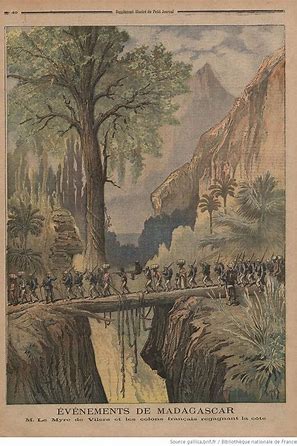 JUNE 1895 – By June 9th the army had reached Maevatanana, a city along the Ikopa River, a tributary which feeds into the Betsiboka River. Again, despite being outnumbered and facing an enemy behind strong fortifications, the French were triumphant.

After this victory, however, the advance slowed to a crawl again over the need to build more roads. Dysentery joined malaria and heat-stroke in killing off men and the survivors were often left looking too weak and emaciated to go on. But go on they did.

JULY AND AUGUST 1895 – General Duchesne continued killing off plenty of his own men with his road-building and snail’s pace. The failure of Madagascar’s army to whittle the invaders down to nothing during this period through guerilla attacks shows that the French War Ministry had no monopoly on incompetence and poor planning.

On August 21st the army defeated the Malagasy forces at Andriba. Occupying the area, Duchesne took advantage of the cooler climate of the plateaus in this region to let the rest of his army catch up with him, while he assembled a flying column of 5,000 men (including the Legionnaires). That flying column proceeded ahead at a much quicker pace.

SEPTEMBER 12th, 1895 – Lieutenant Langlois described the men of the flying column – who were the HEALTHIEST OF DUCHESNE’S REMAINING MEN – as “so dejected, so depressed, so pale that one would have believed them more dead than alive. Their clothes were in rags, their boots in pieces, their helmets, too large for their emaciated heads, fell to their shoulders, covering almost entirely their jaundiced faces.”

SEPTEMBER 14th – The flying column left Mangasoarina, near the plains of Andriba, where they had been allowed to rest for a few days. They reached Mount Tafofo and were delighted to see that the army of Madagascar had failed to secure the trails up the mountainside from the Mamokomita Valley. “Battle of the blundering commanders!” Seriously, it’s like both sides were trying to throw the war.

One unopposed march up to the summit later, the FFL and their comrades got a spectacular view of the countryside below, including the town of Tsmainondry, where there was actually a large force throwing up fortifications to challenge their advance.

SEPTEMBER 15th – At dawn, General Duchesne had his men attack Tsmainondry. They waded through the marshes before them and charged up the slopes as the Malagasy artillery opened fire on them. The French armies returned fire while climbing. Once again the men of Madagascar prematurely gave up and fled from fortifications which should have let them hold off the invaders for days at least. Approximately 300 of the defenders were retreating in such a blind panic that they plummeted to their deaths over a precipice.

SEPTEMBER 19th – The French Foreign Legion and their comrades charged up the inclines of the Ambohimenas Mountains just north of the capital Tananarive. Amid a lot of gunfire, the Malagasy troops eventually abandoned their strong positions and retreated.

SEPTEMBER 20th THROUGH THE END OF THE CAMPAIGN – In this era before the psychological stresses on soldiers were studied the Legionnaires had already coined a term – “le cafard” (the cockroach) – for the mindset which suddenly prompted a soldier to explode in violence like suicide or attacks on comrades. In O’Neill’s Vietnam experiences from the 1890s both were likely, but here in Madagascar it was all suicides, almost daily until the end of the month. Amid the regular army as well, not just the FFL.

SEPTEMBER 22nd – Duchesne’s army resumed its advance. Stragglers were often hacked to pieces by men and women of Madagascar. Their mutilated corpses were taken to the capital and shown off to keep up national morale. At these heights the nights were bitterly cold and many men froze to death.

SEPTEMBER 24th – The men who were still walking on the French side were informed that, due to supply foul-ups, their daily rations were being cut in half.

SEPTEMBER 26th – The invading army took the last of the Ambohimenas peaks between them and Tananarive. It was the usual one-sided battle.

SEPTEMBER 28th – The French forces resumed their advance, getting in positions around the elevated capital city. Many villagers offered them fruit and other food. On this date a Malagasy attack on the French rear was driven off.

SEPTEMBER 30th – After occupying the ridge closest to their target, the French army opened up an artillery barrage on Tananarive. The troops were steeling for a full assault but before the barrage was finished white flags were raised in the capital. The invading army had won and Madagascar became a French Protectorate for a time.