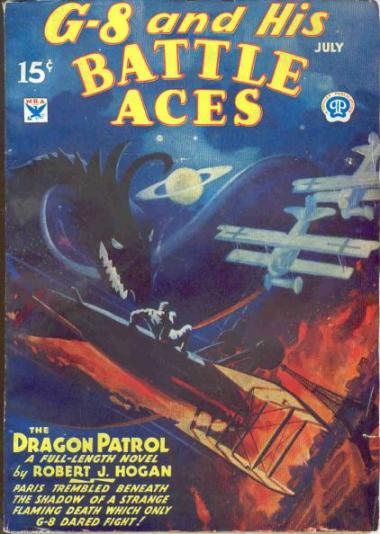 G-8 was created by Robert J Hogan in 1933 when World War One was still being called simply the World War or the Great War. Over the next eleven years Hogan wrote 110 stories featuring the adventures of G-8, the street-smart pug Nippy Weston and the brawny giant Bull Martin. The regular cast was rounded out by our hero’s archenemy Doktor Krueger, by Battle, G-8’s British manservant and by our hero’s girlfriend R-1: an American nurse/ spy whose real name, like G-8’s, was never revealed. 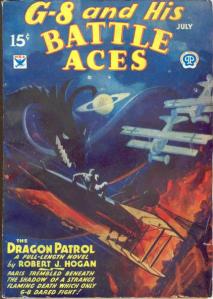 10. THE DRAGON PATROL (July 1934) – This story eerily foreshadows elements of the Hindenburg disaster of 1937 and of the horrific London Blitz of 1940. The actual dragon on the Pulp magazine cover is mere poetic license. The real menaces in this G-8 tale are two Zeppelins customized for super-silent raids over Paris itself. The Zeppelins are ravaging the City of Lights with special incendiary bombs that leave so much of the metropolis in charred ruins that the French are contemplating surrendering. (This was before the French had made a National Pasttime out of surrendering.)

The main villain this time out is Kapitan Geist (“Captain Ghost” in German), the salty senior commander of the twin Zeppelin unit who approaches his airborne missions like a seasoned sea captain of the skies. Geist’s Zeppelin is called “Fafnir” to emphasize the dragon motif but we never learn the name of the other one.

G-8’s skill as a cryptographer is on display in this story as he uses that proficiency plus his talents at disguise to commandeer the Fafnir and use it to reduce the German city of Cologne to a smoking ruin as revenge for what the Zeppelins were doing to Paris. He also frees Nippy and Bull, who were taken captive by Kapitan Geist’s men and causes the collision of the two dragon Zeppelins, bringing about their fiery destruction as well as the destruction of their base.

11. THE HURRICANE PATROL (August 1934) – It’s back to menaces of the super-scientific kind with this adventure. Two times in one morning American front-line units are discovered dead to the very last man. No shots were fired and every single soldier died horribly by suffocation. Panic is taking seed throughout the Allied armies as word of this new wonder weapon of the Central Powers spreads far and wide.

Naturally G-8 and his Battle Aces are called in by General “Black Jack” Pershing and ordered to get to the bottom of this deadly enigma called “the breath of death”. The trail leads through espionage antics in Paris across the Mediterranean and into northern Africa. A Central Powers plot to develop pellets that could induce hurricanes the way “cloud seeding” could stimulate rainfall produced an incredibly lethal side- effect: the obliteration of oxygen in the immediate vicinity of the pellets.

G-8’s love interest R-1 is introduced in this tale. She’s a spy who is deadly with a pistol and at hand-to- hand combat. R-1 kicks butt and has no squeamishness about the bizarre menaces she finds herself facing when teamed up with her beau G-8. This story’s wider geographical reach is welcome and the threat is appropriately outlandish in the time-honored and enjoyable Pulp magazine tradition. In my opinion as a hard-core Pulp geek The Hurricane Patrol is as much an underrated G-8 gem as The Dynamite Squadron.

12. THE PANTHER SQUADRON (September 1934) – Another recurring member of G-8’s Rogue’s Gallery of villains makes his debut in this exceptionally enjoyable story. Dr Mollfuss is this Austrian’s name and his scientific specialty is a combination of brain surgery and advanced vivesection practices.

The first menace the good doctor throws at the Allied armies comes in the form of the Panther Squadron. Dr Mollfuss has tinkered with human and animal brains to the point where he can combine the speed, savagery and cunning of panthers with the higher brain functions of human fighter-pilots. The end result is a squadron of Panther-Men. These Panther-Men, or Panzeren, have the heads of over-sized panthers and the bodies of Central Powers pilots who served as Mollfuss’ experimental subjects.

The Panther Squadron marked out even wilder territory for the G-8 series of Pulps and Robert J Hogan would try to outdo himself in terms of wonderfully campy and over-the- top perils for our heroes in the tales that followed. The Panther-Men are a fan favorite for their sheer outrageousness and the way they were the vanguard of all the enjoyably surreal wartime action to come in the stories that lay ahead.

12 responses to “PULP HERO G-8 AND HIS BATTLE ACES: STORIES TEN THROUGH TWELVE”