G-8 was created by Robert J Hogan in 1933 when World War One was still being called simply the World War or the Great War. Over the next eleven years Hogan wrote 110 stories featuring the adventures of G-8, the street-smart pug Nippy Weston and the brawny giant Bull Martin. The regular cast was rounded out by our hero’s archenemy Doktor Krueger, Battle, G-8’s British manservant and by our hero’s girlfriend R-1: an American nurse/ spy whose real name, like G-8’s was never revealed.

4. THE MIDNIGHT EAGLE (January 1934) – After an absence of one story G-8’s archenemy Doktor Krueger is back! A gigantic Eagle flies the skies over No Man’s Land and is wreaking havoc with Allied pilots, clawing them out of the skies with its enormous talons. Even our hero and his Battle Aces barely survive their first encounter with the airborne menace.

G-8, Nippy and Bull are assigned to get to the bottom of this monster being employed to such deadly effect by the Central Powers and after the usual dogfights, fistfights, shootouts and escapes the trio discover that the huge eagle is a creation of wiley old Doktor Krueger! And not only that but under the Eagle disguise the Midnight Eagle is basically a modified German war Zeppelin. Needless to say our heroes come out on top once again, but not until after dozens of Allied pilots have met their doom. 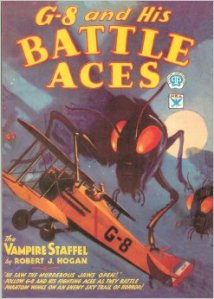 5. THE VAMPIRE STAFFEL (February 1934) – This mis-titled story introduces another memorable member of G-8’s Rogue’s Gallery of foes – Amen Sikh, an Egyptian alchemist who was part of the Islamic uprising in Egypt during World War One. The goal of that uprising was to have Egypt once again become part of the Ottoman Muslim Empire, one of the Central Powers along with Germany and Austria-Hungary. Amen Sikh retains that goal.

Despite the misleading title the main menace in this tale is a deadly plague unleashed by Amen Sikh. Thousands have already died along the Western Front and Amen Sikh has even bigger plans in store. He wants his beloved Ottoman Empire to emerge as THE world power after the war and is content to let the monstrous bugs that carry the plague spread it to Berlin as well as London and Paris. An unlikely – and strictly temporary – alliance of necessity forms between G-8 and the Battle Aces and the Germans and Austro-Hungarians. These strange bedfellows are able to nip Amen Sikh’s genocidal plans in the bud. P.S. A figure called The Vampire Ace is the root of this story’s inappropriate title.

6. THE SKELETON PATROL (March 1934) –  Doktor Krueger dabbles in Kaiju! That’s sort of the premise of this exciting and action-packed adventure. The good doctor has overseen the construction of a gigantic skeleton in a Grim Reaper cowl and set it loose on the soldiers and pilots of the Allied Powers!

Like King Kong atop the Empire State Building this latter-day colossus swats planes out of the sky and rampages through the ground troops with equal ease. It’s up to G-8 and company to trace the immense construct to its lair and somehow, against all odds, arrange for its destruction. Do they succeed? You already know the answer to that!

16 responses to “PULP HERO G-8 AND HIS BATTLE ACES: STORIES FOUR THROUGH SIX”