CASE OF THE MIRROR OF PORTUGAL (1971) – RIVALS OF SHERLOCK HOLMES 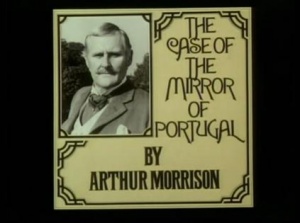 Review: This is the second of two Dorrington episodes from Season One of The Rivals of Sherlock Holmes. Peter Vaughan reprises his role as the unscrupulous yet charming private investigator. Kenneth Colley and Petronella Barker are also back as Farrish and Miss Parrot, Dorrington’s lovebird aides who often do the legwork for their demanding boss. 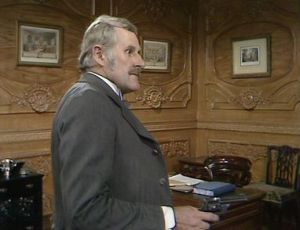 The story begins with Horace in the middle of one of his typical scams. He’s been hired by an insurance company to recover a stolen painting after his Scotland Yard rival Inspector Brent (Lloyd Lamble) failed to do so.

Dorrington tracked down the art thief and recovered the painting but is now auctioning it off on the underground market to the highest bidder since they’ll pay more than the insurance company. Meanwhile he keeps the painting concealed under a mundane drawing of a dog.

While pursuing that shady undertaking the ruthless detective gets hired by restaurateur Leon Bouvier (Oscar Quitak) to recover a precious item that was just taken from him in an alleyway during an armed robbery.

At first the culprit seems to be Leon’s seedy and larcenous cousin Jacques Bouvier, with whom Dorrington has had previous dealings. The stolen item is the (fictional) diamond called the Mirror of Portugal, which was passed on from Portuguese Royalty to French Royalty, bringing dark fates upon all its owners.

In 1789, during the French Revolution, the diamond was taken from Marie Antoinette and found its way into the possession of a French charcoal burner – the ancestor of the two Bouvier men. From there it passed its way from scheming Bouvier to scheming Bouvier until at present, Leon Bouvier and his cousin Jacques – both living in London – are the current members of that nefarious family who are fighting over the jewel.

Dorrington employs actual crime scene investigative work of the kind common today but scoffed at in the Nineteenth Century. His detective work – helped by legwork from Farrish and Miss Parrot – leads him to the real figures behind the alleyway theft of the diamond.

I’ll avoid spoilers by not giving away their identity but I will observe that my favorite part of this episode was the dangerous standoff between Horace and the guilty parties. Their mental chess match with a loaded gun as the referee plus the nature of the relic being fought over put me in mind of The Maltese Falcon scene with Sam Spade and assorted shady types dealing and double-dealing with each other while holed up in the same room.

So does the Mirror of Portugal wind up being “the stuff dreams are made of” for our larcenous characters or maybe for Dorrington himself? Or are we in for an ending like the Sherlock Holmes story The Sign of Four? Or does international law ensure that the diamond goes back to its nation of origin?

Watch the episode and see, and also keep an eye out for a very young Jeremy Irons in a very small supporting role. Given his dopey performance here he’s lucky his career wasn’t over before it began.

This wraps up Season One. I’ll move on to reviewing Season Two next!