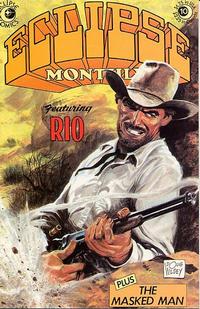 Synopsis: This was the final issue of Eclipse Monthly, which got canceled. The Masked Man was the most popular character in the anthology magazine and he graduated to his own solo title after this. Doug Wildey’s iconic old west gunslinger Rio was also featured in this issue along with Jetta Sixx, Wayne Truman’s heroic female pilot.

True to his word, the Masked Man (Dick Carstairs) has been at the side of Maggie Brown (his emerging love interest) each step of the way for her therapy. She is still at Frank Capra Memorial Hospital learning to cope with her new blindness following her injuries during our hero’s battle with the Joe Manfredi Gang last time around.

One of the nurses at the hospital is determined to play Cupid for the Masked Man and Maggie, little realizing they were already falling in love. Our hero’s reporter friend Barney McAllister is beginning to be annoying to me because NOW he feels that this romance may jeopardize his friendship with Carstairs.

Barney’s opposition to his old friend potentially selling out to Dan Drekston’s merchandising offers was understandable, but this is getting ridiculous. Further dragging this story down is the inclusion of Aphidman (a Spider-Man spoof) for even MORE comic relief in an already too cutesy tale.

At any rate, an armed party of masked assassins from an unnamed foreign country raids the hospital because Princess Maria, the daughter of the national leader they oppose, is – like Maggie Brown – being treated at Frank Capra Memorial Hospital.

In the chaos and action that follow, the Masked Man  battles the machine-gun toting assassins and Barney’s selfish plan to keep Dick and Maggie apart is thwarted. The sightless Maggie stumbles into the fight with the raiding party, accidentally causing their defeat. (WAY too much comic relief.)

At story’s end our hero and Maggie share their first kiss and Barney seems to accept that they were meant to be together.

From here it’s on to the Masked Man’s short-lived solo series. B.C. Boyer started out so strong with these superhero tales but by this point was losing his touch regarding just how much humor to inject into each issue.

I’LL REVIEW THE NEXT MASKED MAN STORY SOON. KEEP CHECKING BACK FOR UPDATES.

FOR MY LOOK AT STALKER, DC’s star-crossed Sword, Sorcery & Fantasy series from the 1970s, CLICK HERE