Anna aka That Star Wars Girl, brings her considerable artistic abilities to the 50th Anniversary Celebration of horror icon Vampirella. Fresh story content is being created this year regarding the figure’s half-century of existence along with special commemorative covers. 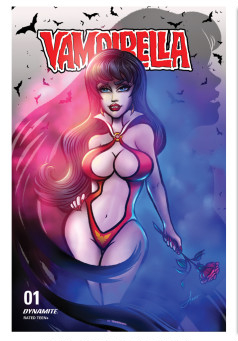 Anna, a free-lance artist, pop culture critic, co-host of The J.A.C.K. Show and founding member of the Fandom Menace, has her Indiegogo project for Dynamite Entertainment up right now.

Not only does Anna’s cover (at right) look terrific, but the rose in Vampirella’s hand is in memory of Anna’s younger sister Ellen Rose, who passed away last June.

T-Shirts are also available (see below).

Join the legions of fans who love Vampirella AND Anna! To order your copies of the cover and/ or T-Shirts click HERE . JUST NINE DAYS LEFT!