KILLRAVEN TWENTY-NINE: THE END – K.R., SABRE AND AN EXPLOITATION OF EVERYTHING DEAR

My final Killraven post will look at the last few story elements that writer Don McGregor transferred from KR’s canceled Marvel series over to his independent Sabre series at Eclipse Comics. For my detailed look at how McGregor used many Killraven elements in the 1978 Sabre graphic novel click HERE .

Regular readers know I give Don McGregor a lot of praise for his work on Panther’s Rage and on the Killraven stories at Marvel, at least until his half-assed, rushed and unsatisfying KR graphic novel in 1983 (see previous installment). Unfortunately the 1983-1985 Sabre series at Eclipse Comics represented McGregor’s writing at its worst.

With hindsight we readers can see that, back at Marvel, the editors clearly reined in Don’s tendency toward self-indulgent and pretentious rambling. Over at Eclipse there were no such constraints on him, making the 1983-1985 Sabre stories unbearable to read. The series went from bi-monthly to quarterly to “whenever” and was mercifully axed with its 14th issue.

This final Killraven installment will deal with just two issues of Sabre. One that reflects what KR and his band of Freemen would have faced had they reached their Yellowstone Park destination before their 1973-1976 series was canceled, and one that reflects another adventure that the rebellious Freemen might have faced on their long odyssey to Yellowstone.

A. AN EXPLOITATION OF EVERYTHING DEAR – Part Two (March 1983)

As the overall title for this Sabre story would indicate, any sense of subtlety was now beyond Don McGregor. If further proof is needed, the main villain in this tale is named Joyful Slaughter. Seriously.

Killraven elements and their Sabre equivalents: 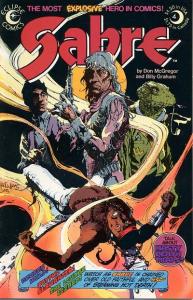 *** The KR story Red Dust Legacy featured the High Overlord, the leader of Earth’s alien conquerors, luxuriating in the spray of Yellowstone Park’s geyser Old Faithful. He was anticipating the day when Killraven and his Freemen would reach the aliens’ Yellowstone Park fortress, confident that KR would be defeated and put to death once there.

*** This Sabre tale was set in October of 2020, or 37 years in the future as it would have been to 1983 readers. (Yes, McGregor used the same year for both KR and Sabre) The post-apocalypse rebel Sabre was being held prisoner at Yellowstone Park in preparation for his coming execution.

*** The main villain of this Sabre story, Joyful Slaughter, is having Sabre executed by being strapped spread-eagled across a metal frame over Old Faithful. When the geyser erupts, the 450-degree scalding water will kill the rebel.

It is clear from the narration that this is a common form of execution used by Joyful, the governor of post-apocalypse Wyoming. In the Killraven series it would have been KR and his rebels facing death atop Old Faithful.

*** Two of Sabre’s fellow prisoners who will be killed the same way are Deuces Wild and Summer Ice, two gay male lovers who apparently are substitutes for Huey and Louie back at McGregor’s Killraven series.

*** Just in time, Sabre escapes the metal frame over Old Faithful amid narration in which Don McGregor cannibalizes some of his sentiments from The Legend Assassins, in which the High Overlord was broadcasting the rebel Killraven’s imminent execution around the world. (See my earlier installments.)

*** Sabre, Deuces Wild and Summer Ice (NOT strippers) proceed to fight their way out of the Yellowstone Park fortress, ruining the decadent “Execution Celebration” that Governor Slaughter was throwing for himself and the political elite of 2020’s oppressive regime.

B. AN EXPLOITATION OF EVERYTHING DEAR – Part Three (May 1983)

Killraven elements and their Sabre equivalents:

*** Don McGregor introduces the rebel Whippoorwhill Zack, a big, bald but less mentally challenged version of Old Skull from the Killraven stories. Zack is every bit as fawning over Sabre’s eloquence as Old Skull was over Killraven’s.

*** Continuing their efforts to reach Sabre’s rebel colony in Florida, he, Deuces Wild and Summer Ice are determined to throw off the pursuing Joyful Slaughter and his troops. To that end the trio don futuristic radiation suits from the aircraft they stole last issue and plunge into the radioactive wasteland of what used to be Oklahoma.

(The 1978 Sabre graphic novel established that Oklahoma was one of the states rendered dangerously uninhabitable following nuclear reactor accidents. The place is filled with what we would today call Chernobyl-type sights of desolation and destruction.)

*** Sabre, Deuces and Summer survive the journey through radioactive Oklahoma and fly back to Florida aboard commandeered high-tech android butterflies like on the cover. Killraven and his Freemen might have flown from Florida to near Oklahoma aboard huge mutated butterflies, possibly Mourning Prey’s offspring when they fully matured and reached their adult size.

*** As for Killraven’s clash with his brother Deathraven which was being set up in the 1973-1976 KR series, I’ve covered in previous installments how I think that red-haired Sabre villain Blackstar Blood was cannibalized by McGregor from what Deathraven was originally supposed to be like. Since Blackstar Blood was featured in the 1978 Sabre story, readers got stuck with a much less impressive Deathraven in the 1983 Killraven graphic novel.

In later decades Marvel Comics went on to try rebooting the Killraven saga under different writers and artists but none of them ever recaptured the magic of the Don McGregor/ Craig Russell writer/ artist combo from the original series. One such attempt featured KR fighting alongside characters from Marvel’s other dystopian comic books of the 1970s, which is why I added Deathlok as a Freeman in my revisions.

At any rate, this series of blog posts examining the Killraven stories comes to a close. If we want to focus only on the quality issues we can say it was a very underappreciated series which was way ahead of its time.

FOR MY LOOK AT HOMBRE, SPAIN’S POST-APOCALYPTIC COMIC BOOK FROM THE 1980s, CLICK HERE

26 responses to “KILLRAVEN TWENTY-NINE: THE END – K.R., SABRE AND AN EXPLOITATION OF EVERYTHING DEAR”