TEXAS 27 FILM VAULT ANNIVERSARY AND A CALL TO FANS

*** SADLY, I FORGOT TO NOTE THE FEBRUARY 9th ANNIVERSARY OF THIS SHOW THIS YEAR.

Sunday was the 35th Anniversary of the very first episode of The Texas 27 Film Vault from Saturday, February 9th of 1985. My psychotically obsessive research on the show has yielded a lot of info over the years but I have now worn out every source I could find.

Even the show’s co-host and co-creator Randy Clower has been bled dry of information on the show by me. Over the years other fans of the show – and a special shout-out goes to “the Cap’n” – have provided info here and there that often led me to concrete source material.

Anyway, here are some movies that we have general, varied reason to believe were shown on The Texas 27 Film Vault but I need original broadcast dates, info on comedy sketches or movie ticket give-aways, etc. Episodes aired for 2 and a half hours Saturday nights from 10:30pm to 1:00am in Texas and Oklahoma.

The Film: “Thought Monsters” leech into atomic energy, then extract human brains and spinal columns to use as their corporeal forms. This is a Bad Movie Classic remembered largely because of the scenes where the flying brains, sporting antennae, attack their prey, with their spinal cord “tails” streaming along behind them.

Reason for believing it was shown: Some of the Flying Brain Creatures are on the 1987 Texas 27 Film Vault poster.

The Film: The title says it all for this fun but weird black & white time-waster.

Reason for believing it was shown: Tex (Ken Miller) announced it was to be the movie “Next time on The Texas 27 Film Vault” on one of the surviving episodes that I have. 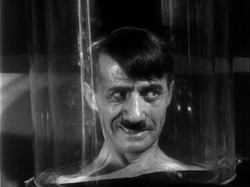 The Film: This movie is so infamous surely nobody needs any information from me at this late date.

Reason for believing it was shown: It is mentioned by the hosts in some episodes AND appears on the 1987 T27FV poster. 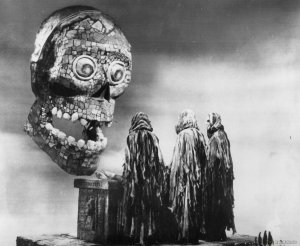 The Film: Blame Canada for this trippy, 3-D horror oddity. One of the patients of a bland white psychiatrist commits suicide after repeated wearings of an odd tribal mask. The doctor foolishly begins trying the mask himself and is subjected to weirder and weirder surreal visions and interactions with dark entities.

Reason for believing it was shown: The distinctive tribal mask is on the 1987 poster.

The Film:  A Roger Corman product with the Professor from Gilligan’s Island as part of the expedition to an island where crabs have been mutated to giant-size by – what else – radiation. The crabs devour humans and then have the memories and voices of the people they ate.

Reason for believing it was shown: At the end of the Gorilla At Large episode Tex mentions it as the movie to be shown “Next time on The Texas 27 Film Vault.”

The Film: This is director John Boorman’s utterly ridiculous sci-fi flop set in a post-apocalypse future. Sean Connery wears a pseudo-wrestling outfit and humiliatingly has to appear in A WEDDING GOWN at one point in the film.

A giant stone head is revered as a god and is always spouting lines like “The gun is good … the penis is evil.” Boorman seems to think he’s being deep but Zardoz embodies all the worst elements of 1970s sci-fi films and is good only for ridicule.

Serial Episode: None, due to the length of the movie.

Reason for believing it was shown: I have this hilarious episode on a VHS tape from e-bay, but I need an exact date. The commercials seem to be for items around May or early summer.

The Film: The infamous cult horror movie which was filmed over the course of so many years (due to shortages of funds) that the age and weight of the characters noticeably fluctuate in certain scenes. The lame claymation monsters unleashed by a Necronomicon-style tome have made this a fan favorite for decades.

Reason for believing it was shown: Randy and Richard mention it a few times in surviving episodes, and it WAS a staple on many Movie Host Shows of the 70s and 80s. 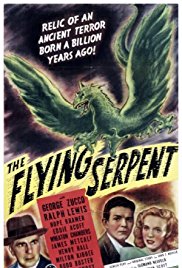 The Film: George Zucco plays a mad archaeologist who discovers the last living specimen of the winged serpent that he says inspired Aztec myths about Quetzalcoatl. He periodically sics the blood-thirsty monster on innocent victims to keep them away from a secret Aztec treasure that he covets.

Serial Episode: No idea, for now, but given how short The Flying Serpent is they may have shown two serial episodes or a serial and an educational short.

Reason for believing it was shown: The lame winged serpent prop appears on the 1987 poster.