THE WAR UNDER THE SEA (1892): ANCIENT SCIENCE FICTION 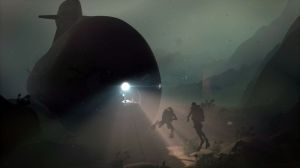 THE WAR UNDER THE SEA (1892) – Written by Georges Le Faure. This sci-fi work was intended as an escapist societal salve to a French public still smarting from their loss to Germanic forces during the Franco-Prussian War just over two decades earlier.

One of the main characters in The War Under The Sea is Count Andre Petersen, a French military man who saw service in the Franco-Prussian War. The Count was appalled at France’s humiliation and since then has been running a secret intelligence organization to ensure that his homeland will be much better prepared the next time they must face Germans in war. And that’s not the only outrageous science fiction concept put forth in this novel. (I’m kidding.)

Unfortunately for Count Andre the Germans have been outmaneuvering his organization at the arts of spycraft and know the names of every member of his secret organization – even the Danish, Austrian and Alsation operatives. Unless the Count agrees to a political marriage to the daughter of a German Consul followed by the disbanding of his spy network the Germans will kill every one of his agents.

Interestingly enough, despite this threat the Germans are not depicted as being any more bloodthirsty than the alleged “heroes” of this story as we will see. Though the Count and his allies prove equally callous about large-scale killing (and worse) their attitude is romanticized and approved of by the narrative since Andre and the others are fighting France’s traditional Continental foes the Germans. Instead of Film Noir think of this novel’s approach as callous enough to be called World Noir. Or at least Politics Noir.

The Count is rescued from his dilemma by Jacobus Delborg, a Dutch scientist who has created an incredibly advanced submarine and has been running an anti-German spy network of his own.

Andre falls in love with Delborg’s sister Ellen and the conspirators fake the Count’s death, freeing him to join Jacobus in his sub-aquatic war against the Germans.

Andre, Jacobus, Ellen and Monsieur Flageot, one of the Count’s French agents, use one of Delborg’s subs to prey on German shipping enroute to Australia. Once there they use German captives as LITERAL SLAVE LABOR to construct a secret submarine base for our main characters. (I told you our “heroes” wind up looking as bad as their German foes, at least to our 21st Century sensibilities if not to readers of the 1890s. )

Our main characters casually – and callously – work the German captives until they drop and HAPPILY ANTICIPATE A TIME WHEN THEY MAY BE ABLE TO EXTERMINATE EVERY GERMAN IN THE WORLD! This almost satirical cruelty on the part of the novel’s purported “good guys” is a large part of the interest this story holds. It sure as hell makes them stand out from the protagonists of the many other Super-Submarine stories of the late 19th and early 20th Centuries.

The Vindex’s vast array of electrical weaponry and super-powerful torpedoes allows the main characters to wreak havoc on German shipping around the world. Since this is pre-World War One the Germans still held a fair number of Pacific Islands when this novel was published.

SPOILERS: Count Andre winds up captured by the Germans and taken to Mannheim. The slaves at the Great Barrier Reef Submarine Base rise up and manage to take over that base only to be slaughtered by Delborg, Ellen and the others. The Vindex travels through the Suez Canal and through secret underwater caverns linking the Danube and the Rhine to the North Sea.

The Count is rescued by a Vindex raid on Mannheim and our main characters have a happy ending, no doubt with gleeful visions of a Teutonic Genocide dancing in their heads.

Anyway, if you don’t mind a little Reverse Final Solution sprinkled in with your Steam-Punk THIS is the novel for you! +++