CHARLEMAGNE: OGIER AND THE CROWN OF DENMARK

FOR THE FIRST CHAPTER ON CHARLEMAGNE’S PALADINS CLICK HERE 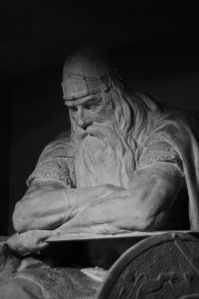 OGIER AND THE CROWN OF DENMARK – King Geoffrey of Denmark saw his lands invaded by pagan Vikings from the north. The ferocity and numbers of the invaders proved too much for Geoffrey and his men so the king sent messengers to Emperor Charlemagne asking for help.

Charlemagne nobly set aside the lingering hostility he felt for Geoffrey from the time when that King of the Danes refused him tribute and the Emperor had led his armies to defeat Geoffrey. Charlemagne decided to send troops to assist Denmark but also to test the character of his Paladin, Ogier the Dane … Geoffrey’s son.

The Emperor wanted to see how Ogier would conduct himself in such a situation, facing superior odds in the field AND having to contain his resentment toward his father Geoffrey for having sent him as a hostage to Charlemagne’s court after his military defeat long years earlier.

Charlemagne placed Ogier at the head of an army consisting of a thousand Paladins and thousands more common Frank soldiers. Wielding his enchanted sword Cortana, the Dane led his men north.

In just a few months Ogier salvaged the military situation for the Danes, dealt several defeats to the Vikings and ultimately drove those invaders back to their northern domain.

Circumstances had prevented Ogier from interacting with his resented father Geoffrey during the campaign, since Geoffrey was ashamed at his own conduct long ago and avoided meeting with his son. With the war over, Ogier the Dane led his forces to the capital to pay a courtesy call on King Geoffrey.

Approaching the city, the Dane and his men heard church bells sounding a death knell. Geoffrey had just died and had tried to soothe his guilty conscience by leaving his throne to his wronged son Ogier.

The Paladin rushed to the church where Geoffrey’s body lay in state and “bathed the lifeless form in tears of mourning.” He had been left alone to pay his respects to his late father, and just as no one witnessed his tears, no one witnessed the arrival of an angel from Heaven with a message for Ogier.

The angel instructed the Dane to give the crown of Denmark to his brother Guyon, and bear no other title than Ogier the Dane, Paladin of the Emperor Charlemagne. This angel also told Ogier that his future was glorious and that other kingdoms were reserved for him in the next life.

Ogier complied, giving his brother the crown of Denmark. After respectfully saluting his stepmother, the Dane led his troops back to Charlmagne’s realm.

The Paladin had greatly impressed the Emperor with his conduct during all this and from then on Charlemagne demanded that Ogier be treated with the respect the Dane would have been paid had he accepted his homeland’s crown.

Needless to say, this fueled even more resentment toward Ogier by Charlot, the villainous son of Charlemagne, setting the stage for future intrigues.

13 responses to “CHARLEMAGNE: OGIER AND THE CROWN OF DENMARK”